ALAMO, Texas (Border Report) — Jim Chapman is a soft-spoken retired physician’s assistant who will stop mid-sentence to examine the splendor of a passing bird, or to appreciate a rare Montezuma bald cypress tree.

But even his easy-going spirit gets irked when it comes to the building of a border wall near his beloved Santa Ana Wildlife Refuge in South Texas.

On Monday, Chapman walked the perimeter of the 2,000-acre wildlife refuge looking for nearby stakes indicating where President Donald Trump’s border wall is to be built in the vicinity.

Congress appropriated $1.375 billion for a South Texas border wall in the fiscal year 2019, but lawmakers exempted Santa Ana and a few other historical sites in the Rio Grande Valley, from having a border wall cut through it.

Chapman and others worry it is a gray area and that the border wall, or at least part of its 150-foot enforcement zone promised by U.S. Customs and Border Protection, will be built there.

U.S. Rep. Filemon Vela Jr., D-Texas, during a tour of his congressional district, told Border Report in August that he, too, was concerned that the exemption granted by Congress wouldn’t go far enough to protect this wildlife refuge.

Vela, an ardent opponent of the border wall who voted against appropriating the funds, said he is worried that the 150-foot enforcement zone will encroach on Santa Ana Refuge lands.

Chapman on Monday pointed to a water standpipe that he said indicates the demarcation line separating where refuge-owned levee land ends. From that point, there is still one-third of a mile of refuge land, with thick lush brush on the south of the levee that Chapman worries will be cleared to make way for the Border Infrastructure System’s enforcement zone.

Scott Nicol, co-chairman of the Sierra Club Borderlands Campaign, told Border Report on Monday that maps released by CBP in the summer for public input showed that northeast section of Santa Ana walled off.

Said Nicol: “Levee border walls are impenetrable to all terrestrial wildlife, and will turn the area south of them into a death trap for animals if there is a flood like the one we saw in 2010 that inundated the floodplain up to the levee.” 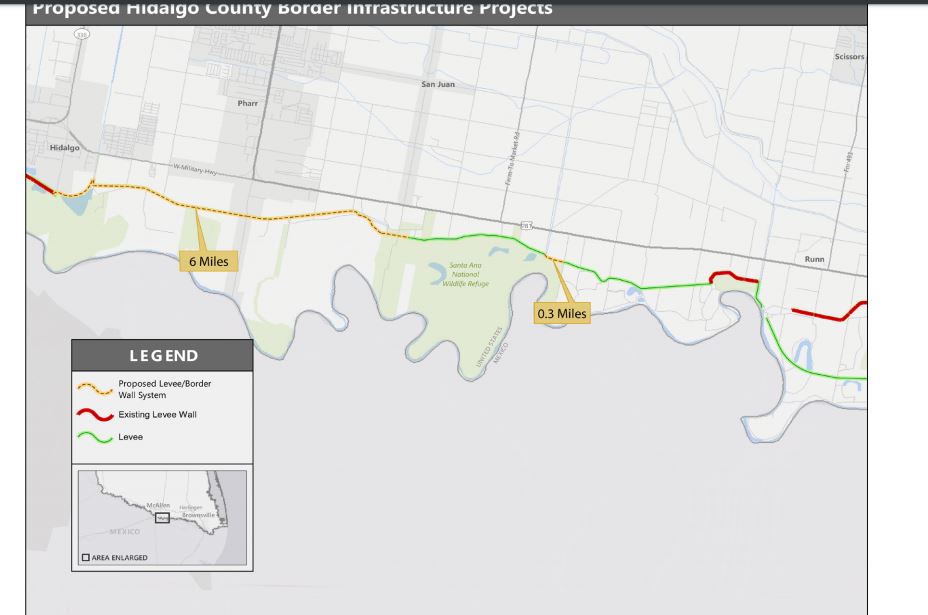 A flood in 2010 wiped out this section of the refuge, leaving it underwater for four months, Chapman said. Walking through the refuge, several tracts of lands are still recovering from that flood and it is obvious where new growth has started to revitalize the area.

On Sept. 29, CBP in partnership with the U.S. Army Corps of Engineers awarded a contract to Gibraltar-Caddell Joint Venture for up to $296 million to build 22 miles of noncontiguous border wall starting east of Santa Ana. The 18-30 foot tall steel bollards are to fill in the gaps of where a border wall was begun under the Secure Fence Act of 2006.

“The refugee doesn’t own the land under this levee. So even though Congress passed a law in their 2019 appropriations bill that said that no wall will be built on Santa Refuge, CBP picked up on the fact that if they put a wall there on the levee, technically it’s on refuge property, but if they put a wall here where we’re standing, the land under us isn’t owned by the refuge, so technically they would not be breaking that appropriations bill,” Chapman said on Monday.

Just feet from the levee in this one-third mile section, Chapman on Monday spotted several colored stake markers. “Where there are stakes, there is intent to build,” he said.

Although temperatures were in the high 90s on Monday, the tranquility of the area was unmatched. Tree branches could be heard swaying in the strong breezes that come from the Gulf of Mexico. Butterflies fluttered about, and birds chirped from nests high atop trees.

“This is probably the best wildlife habitat in the Rio Grande Valley because most of it has never been cleared. It’s original forest. It has a huge diversity of wildlife, particularly birds. If you’re a birder anywhere in the United States. You either have been here or it is on your list to come here,” said Chapman, who said endangered ocelots have been found on these lands, and twice has seen a Swallow-tailed Kite bird here.

Just three miles east of this area, however, a giant swath of land has already been cleared for the border wall in what used to be private lands, just south of Donna, Texas.

Chapman walked near the construction site on Monday and worried that this kind of land clearing will destroy the lush brush on the outer acreage of Santa Ana National Wildlife Refuge. He said Santa Ana is all that remains of how the Rio Grande Valley used to be before farms wiped clear the brush.

“Some people might say ‘Well, OK 150 feet big deal.’ But if you look all around us it’s all the habitat there is. They’ve cleared everything. So when you’re talking about 2,000 acres, you don’t want to lost 10 or 20 more acres,” Chapman said.

Sandra Sanchez can be reached at SSanchez@BorderReport.com.

Americans flood into Mexico in search of toilet paper, food and water

TIJUANA (Border Report) — Desperate Californians are flooding into Northern Baja in search of water, toilet paper and other items.

An hour before the Costco in Tijuana opened Tuesday morning, there was already a line forming. Employees said that in recent days, by 10 a.m., there have been 600 people in line. They know this because the store only has 600 shopping carts and those have all been taken.

How is my pet affected by coronavirus? Animal experts explain

‘We need a miracle,’ Entire family tests positive for COVID-19, father in ICU

Tornadoes touch down in Alabama, Mississippi

How is my pet affected by coronavirus? Animal experts explain

‘We need a miracle,’ Entire family tests positive for COVID-19, father in ICU

Study: Oklahoma’s economy could be one of the states hardest hit by COVID-19