TULSA, Okla. – Police in Tulsa have arrested two men in the deaths of three people, including a 7-year-old girl, who were found in a burning house with gunshot wounds. 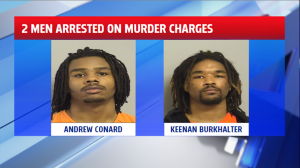 Conard and Burkhalter are each charged with three counts of first-degree murder and one count of arson. Both are jailed without bond and court records do not list attorneys to speak on their behalf.

Investigators say the three victims were shot in the head and that the girl and her father both had smoke in their systems, indicating they were still alive when the home was set on fire.

WILSON, N.C. (WNCN) -- A 25-year-old North Carolina man has been charged with first-degree murder after a 5-year-old boy was shot and killed while playing in his own front yard, according to WNCN.

The community in Wilson, North Carolina, came together Thursday to say goodbye to Cannon Hinnant. His neighbor is charged with murder.

NEW YORK (AP) — Prosecutors are disputing claims by lawyers for a British socialite that they are slowly releasing evidence and improperly withholding the names of women abused by financier Jeffrey Epstein.

POLK COUNTY, Fla. (WFLA) -- What does Lakeland, Florida, and singer and songwriter Taylor Swift have in common? The answer is violinist Bobby Hawk and Sound House Studios.

Hawk, a session player based out of New York City, was recently quarantining with his parents in Winter Haven, Florida, when he was given a mystery project from producer Jack Antonoff and needed somewhere to record.