Oklahoma City police confirmed that two people were struck by gunfire in the area of NE 40th Street and Santa Fe. 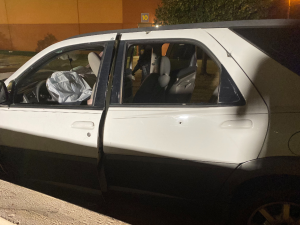 The victims were shot while they were inside a moving vehicle.

A police official at the scene said shots were fired from two vehicles as two people exchanged gunfire while driving. An Oklahoma Highway Patrol officer saw the shootout while passing the vehicles.

The vehicle that contained the two people who were shot lost control and crashed into a wall along a sidewalk.

Both victims sustained non-life-threatening injuries and were taken by ambulance to a hospital. A third person from the same vehicle got out during the shooting and hid behind a building.

What prompted the shooting is currently unknown.

Stay with News 4 as this story develops.