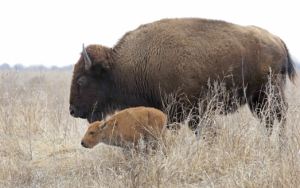 Hundreds of the massive animals have made their home at the Grand Canyon in recent years, but park officials say they’re spoiling water sources and harming the landscape.

Officials came up with a plan two years ago to reduce the herd partly by corralling the animals and shipping them elsewhere. Thirty-one bison loaded in multiple livestock trailers were shipped to the Quapaw Tribe in Oklahoma on Wednesday.

Several other bison were fitted with tracking devices and released back into the park.

The bison are descendants of ones introduced to northern Arizona in the early 1990s as part of a crossbreeding experiment. The state allows them to be hunted on the neighboring national forest.

(NewsNation Now) — The Earth's core is cooling faster than anticipated — an alarming finding, but one that's not likely to impact humans' immediate future, according to a new study published in the journal Earth and Planetary Science Letters.

The results suggest that Earth is "cooling and becoming inactive much faster than expected," the study's lead author, professor Motohiko Murakami at ETH Zurich, told the Weather Channel India.

EARLSBORO, Okla. (KFOR) - Drivers in Pottawatomie County may need to find an alternate route to their destinations on Thursday morning.

Shortly after 10 a.m. on Thursday, troopers with the Oklahoma Highway Patrol were called to a semi-truck on fire along westbound I-40.