An apartment balcony collapsed during a birthday party attended by Irish students in the California city of Berkeley early Tuesday, killing six of the 13 people who fell from the fourth-floor structure, officials said.

Three men and three women in their early 20s died following the collapse, officials told reporters. Five of the victims were from Ireland and one was from California, said Sgt. J.D. Nelson of the Alameda County Sheriff’s Department.

Those Irish citizens who fell from the balcony at the Library Gardens Apartments were students with short-term work visas, gathered in an apartment to celebrate someone’s 21st birthday, Irish Foreign Minister Charlie Flanagan said earlier.

Besides those who died, at least seven were taken to hospitals with serious injuries after the balcony gave way at about 12:40 a.m., Berkeley police Officer Byron White told CNN.

Three victims went to Highland Hospital in Oakland, but officials there said it doesn’t have permission to release the conditions of the two women and a man.

The balcony appeared to have torn away from the rest of the building. Hours after the collapse, the fourth-floor railing — its base gone — was resting upside down on the railing of the balcony below, video from CNN affiliate KGO showed.

Among the debris on the ground: Smashed pieces of the balcony’s concrete floor, a plastic cup and a shoe.

The students were among hundreds of Irish young adults who are working in Berkeley on J-1 visas for the summer, Mark Neville told CNN affiliate KGO. Neville, one of the visa holders, said he is staying in the apartment complex, but that he wasn’t at the party and didn’t know those who were there.

He said he was sleeping in a first-floor unit when he “heard a loud bang.” 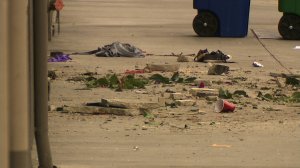 “I went out to get a friend, and I just saw the place (outside) was covered in rubble,” Neville told KGO. “Bodies had been taken away in ambulances. It was tough to see.”

At least one person phoned 911 about the birthday to report a noise complaint, but officers didn’t go to the building because there were shootings in the area that took priority, Police Chief Michael Meehan said. When 911 calls poured in after the collapse, officers were on scene in 2 minutes, he said.

Government officials in both Ireland and the United States reacted with sorrow.

“We mourn the tragic loss of young lives in California this morning,” Irish Prime Minister Enda Kenny posted on Twitter on Tuesday.

The U.S. ambassador to Ireland, Kevin O’Malley, released a statement offering his sympathy to the relatives and friends of those who died.

Flanagan offered his condolences to the victims’ relatives in a statement released by his office. He said his department would provide consular assistance to the Irish citizens involved.

Irish President Michael Higgins expressed “greatest sadness,” saying he learned of the incident while on an official visit to Italy.

“My heart goes out to the families and loved ones of all those involved,” Higgins said.

The apartment is about three blocks from the University of California-Berkeley. The school didn’t immediately know if any of the students were affiliated with it, university representative Roqua Montez said.

Other balconies at the complex have been “red tagged” and the building owner has been ordered to inspect them, officials said.