KAILUA, Hawaii – The only thing extra about the avocado at the Pokini household is the size. 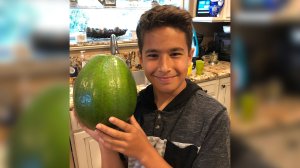 The Pokini family from Hawaii landed themselves in the Guinness Book of World Records after growing an avocado weighing 5.6 pounds, setting a record for the world’s heaviest.

The previous record was held by 5.5-pound avocado, according to Guinness, and was grown by Felicidad Pasalo in Hilo, Hawaii, in January 2018.

Juliane Pokini told CNN the family got the seed from her brother-in-law, Dickie Marciel, who had taken it from his parents’ avocado tree in Kailua, Oahu.

From flowering to harvest, Pokini said it took roughly 10 months for the avocado to reach its maximum weight.

“While it was still in the pot it was pulled out twice by our son, we didn’t think it would survive but it did,” she said. “When we planted it in the ground, we never did anything to it except for some trimming every now and then.”

Pokini said the process for applying with Guinness took a lot of patience, but so did growing the fruit.

After a three-month waiting period, Guinness accepted the Pokini’s application. After that, they had to send evidence of the record they were trying to beat.

“For us it was having experts and witnesses available at the time of weighing the avocado along with a certified scale,” Pokini said. “We also had to have everyone fill out a witness statement along with videotaping.”

Once the evidence was sent in, they waited another three months to hear back.

“This avo was about the size of my 12-year-old son’s head,” Pokini told CNN affiliate KGMB.

After documenting its size, the family used their massive avocado to make none other than guacamole. They were able to make enough to feed about 20 people — typically 10 avocados are needed to serve that many people.

It’s not uncommon to find larger-than-life avocados, if you know where to look.

In 2018, some of the world’s largest avocados weighed just under 4 pounds and were grown in Australia. They were given the name, “Avozillas,” because they are about five times bigger than a regular one. They were sold in specialty grocery stores for about $8 a fruit.

The Pokini family isn’t stopping at their new world record.

They told KGMB they have plans to grow more massive avocados with the harvesting season right around the corner in December.