(CNN) — Even Eleanor Roosevelt didn’t know who was coming for Christmas — though in retrospect her husband’s order for fine champagne, brandy and whiskey might have been a clue. 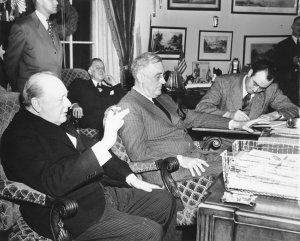 It was December 1941. World War II had drained the Christmas spirit and the US was in shock, just weeks after Japan’s strike on Pearl Harbor dragged it into the war’s inferno. US President Franklin Roosevelt was in no mood for house guests, but Winston Churchill bullied an invitation anyway. Soon, the British Prime Minister was aboard HMS Duke of York, dodging U-boats and plowing across the wintery Atlantic.

A plane whisked his contingent from Virginia’s coast to Washington, DC, and the British, used to London’s air raid blackouts, marveled at the lights of the city below, decked out for its first wartime Christmas.

The first lady learned the identify of her guest only when he was in the car on the way to the White House — with the veil of secrecy lifted with Churchill safe on US soil. What came next was the most remarkable summit in White House history. It came at a moment when humanity was in crisis, with tyranny and bigotry on the march. And it showed that leadership, from two giants equal to their moment in history, could make the world safe for freedom and democracy — no matter how dark the hour during the grim days of that long-ago Christmas.

Churchill was not an easy guest given his idiosyncrasies — afternoon naps, late-night brainstorming, and a habit of parading around in various states of undress. He told FDR’s butler he needed a tumbler of sherry with breakfast, Scotch and sodas for lunch, champagne in the evening and a tipple of 90-year-old brandy for a nightcap.

Years later, Eleanor Roosevelt would express astonishment at the cigar-puffing Churchill’s iron constitution. “Like all Englishmen, he was very fond of beef in any form,” she noted. Even FDR’s notoriously awful cook couldn’t scare off the British as they devoured fresh eggs and oranges denied them by years of rationing back home.

There were bigger differences, too. Roosevelt despised the British Empire, which Churchill adored. American generals in attendance found their visitors snooty. The British brass, hardened by years of defeats, thought the US side naive.

But two weeks together would eventually forge a bond and create the blueprint to win the war: Roosevelt and Churchill eventually inked a Europe-first strategy to defeat the Nazis before imperial Japan and a joint move on North Africa.

They would also agree on the United Nations Declaration, meant to spare future generations from the horror of war and to unite the West with institutions and a common transatlantic mission, only now eroding under another American President.

On Christmas Eve, Churchill stood by as Roosevelt flipped a switch to light the National Christmas tree.

“How can we give our gifts? How can we meet and worship with love and with uplifted spirit and heart in a world at war, a world of fighting and suffering and death?” Roosevelt asked.

He answered his own question, urging Americans to use the holiday season to muster for the fight ahead with “the arming of our hearts.”

“And when we make ready our hearts for the labor and the suffering and the ultimate victory which lie ahead, then we observe Christmas Day — with all of its memories and all of its meanings — as we should.”

Churchill, whose mother was American and who traveled to the US in his “wilderness years,” said: “I spend this anniversary and festival far from my country, far from my family, and yet I cannot truthfully say that I feel far from home.”

“I feel a sense of unity and fraternal association which, added to the kindliness of your welcome, convinces me that I have a right to sit at your fireside and share your Christmas joys.”

Boys and Girls Clubs of OKC provides food to adolescents

Rep. Don Beyer and other lawmakers call for stricter COVID protocols at airports

Health department: 83 Oklahomans have died from the flu