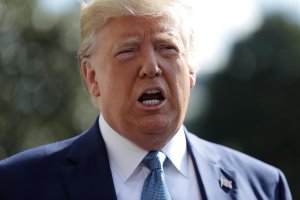 O’Brien, who has been on the job for less than two months, hosted an all-staff NSC meeting Thursday afternoon spoke with outside allies of the Trump White House to announce the cuts, two sources familiar with the meeting explained.

The newly minted national security adviser told White House staffers and outside allies that he plans to shrink the NSC staff by about 50% by early 2020, reducing total staff numbers through attrition from around 200 people now to a total staff of about 120.

O’Brien said the shift would increase the percentage of political appointees compared to experts from the government agencies who normally fill the bulk of roles at the NSC, which is widely seen as the brains behind White House foreign policy making.

Speaking on Fox Business Thursday night, O’Brien said the NSC had “just ballooned to a massive bureaucracy” during the Obama administration.

Citing rising staffing levels under Obama, O’Brien said he wished to get back to the level of staff during the first Bush administration under Condoleezza Rice, which he said was “about 100” staffers.

Before the NSC meeting, officials had told CNN that Trump had directed O’Brien to make cuts to the NSC, suggesting Trump was frustrated by damaging leaks of information that he suspected came from agency staffers seconded to the NSC.

Historical precedent
The cuts come as Trump faces an impeachment inquiry related to Ukraine driven by concerns about the way he handled a July 25th call with Ukrainian President Volodomyr Zelensky.

O’Brien had been expected to address concerns about the internal process at the NSC because of that call. The White House released the rough transcript of the call, but officials there remain frustrated that details of the internal NSC process leaked out through media reports and the whistleblower complaint, which sparked the impeachment inquiry.

O’Brien said Thursday that the cuts were something he has wanted to do for a long time, citing the need to streamline the process, according to two sources familiar with the discussions.

As justification, O’Brien cited the smaller size of the NSC historically. He gave the following examples: during the Cuban Missile Crisis, the NSC had about 12 people, during the Carter years the NSC had around 35 people.

O’Brien himself did not focus on leaks as the reason for the cuts, and said no one was being specifically targeted with these cuts. But one White House official said that leaks are a primary reason driving the change.

That person claimed personnel detailed from various agencies and military branches who were assigned to the White House didn’t approve of the president’s agenda and started leaking. Now, the official added, Trump wants them out.

Trump has called leakers “traitors and cowards” and in September suggested that officials who leaked to the whistleblower are “close to a spy,” and that in “the old days” spies were treated differently, apparently alluding to charges of treason that carried the death penalty.

O’Brien’s outlook is another reason for the cuts, a second White House official said. He sees value in relying more heavily on the departments themselves, instead of ballooning the White House foreign policy shop which he now oversees, this official said.

But Trump himself has repeatedly make it been clear that he does not trust the working level career government officials at the various agencies, including the State Department and the CIA. And O’Brien, who is there to deliver on Trump’s objectives, is not likely to push back on an order like this, the person added.

Attrition
The NSC, directed by the national security adviser, was created in 1947 to provide the president with easily accessible foreign policy expertise and to serve as a convening body for all of the departments and agencies. It has desks for all of the regions around the world and the majority of the staff comes in on a rotational basis — usually for about a year — from across the government.

The Council has grown and shrunk in different administrations, but Trump’s move to dramatically cut the staff raises questions about how effectively it can play its role of informing the commander in chief. It’s just the latest NSC upheaval under his administration, which has seen a record four national security advisers in under three years. Trump ousted former adviser John Bolton in September after 17 months.

The exact role of the NSC under Trump has never been crystal clear, given that the President often acts on his own impulses when it comes to foreign policy and has rotated through a record-setting number of national security advisers in a single term. But with fewer NSC staff, the council may not be able to efficiently develop policy options, which will likely frustrate Trump, one official said.

The process of cutting will not happen overnight, say officials who expect it will largely be carried out through attrition. The White House will not replace personnel when they rotate back to their home agency.

When Bolton served as Trump’s national security adviser, there was a focus on shrinking the council to make it more agile and on streamlining efforts, a former administration official said.

WASHINGTON (AP) — Vice President Mike Pence plans to maintain an aggressive campaign schedule this week despite his exposure to a top aide who tested positive for the coronavirus, the White House said Saturday.

Pence himself tested negative, his office said. Under Centers for Disease Control and Prevention criteria, the vice president is considered a “close contact” of his chief of staff, Marc Short, but will not quarantine, said spokesman Devin O’Malley.

President Trump made multiple campaign stops on Saturday, holding an event in North Carolina and rallies in Ohio and Wisconsin.