OKLAHOMA CITY - An Oklahoma City man has been arrested in connection to the manhunt of Michael Vance.

Vance is accused of a violent multi-county crime spree which started Oct. 23 in Wellston.

Read more about the crime spree and manhunt timeline

Danny Roach, 34, is in custody and facing charges including accessory to murder after the fact, firearm possession and shooting with intent. 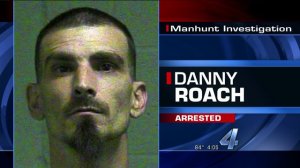 Authorities arrested Roach Saturday morning after a search of his home.

Court records reveal a number of firearms were seized at Roach's home on South Hudson street.

Officials say all happened after Vance had shot two Wellston Police officers, murdered two family members and shot another woman during a carjacking.

Officials say Roach knew Vance was on the run from authorities and he admitted to the crime spree which had just begun.

"Roach said he was in a lookout for Vance while Vance was at his home and that, while Vance was starting to leave, a police car drove by the front of the home. Roach continued to be the lookout and finally told Vance whether it was clear for him to drive away from the home," Whetsel said

The sheriff wouldn't comment on the relationship between Roach and Vance but alluded it would become clear in the coming days.

The U.S. Marshals took the weapons seized and narcotics from Roach's home.

Roach is in jail being held without bond.

Late Monday afternoon, officials say they have two other suspects in connection to the manhunt and people who may have helped Vance hide from authorities.

Arrest warrants have been filed for Reginald Moore and April Harden Roach.

Monday evening, it was later confirmed she was being booked into the Oklahoma County jail.

Moore is not in custody at this time.

If you know where he is or see him, call police.