BETHANY, Okla. – A suspect in the murder of a Bethany man is now in custody.

Oklahoma State Bureau of Investigation (OSBI) announced late Saturday night that they took Selvin Gonzalez from a home on the 1200 block of McKinley in Oklahoma City.

They believe Gonzalez is the man who set fire to a home in Bethany on March 23. The body of an elderly man, Jose Luis, was found in the burned home.

The Oklahoma County Sheriff’s Office says that Gonzalez received treatment for burns they believe he got in that deadly fire. 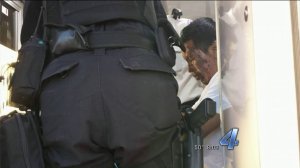 The tactical team from Oklahoma County worked with OSBI to capture Gonzalez and snapped this photo of him in custody.

He is being held on counts of first degree murder and arson.

Another man, Miguel Martinez, was also arrested for being an accessory after the fact.