UPDATE: Tevarus Young was booked into the Oklahoma County Jail on Thursday on a complaint of first-degree murder and shooting with intent to kill. 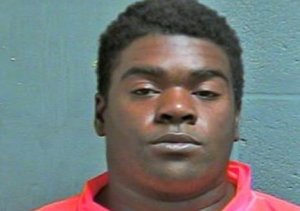 DEL CITY, Okla. – An arrest warrant has been filed for a 19-year-old accused of shooting two people, killing one and injuring another, in Del City.

On Tuesday, at around 7:45 p.m., Del City officers responded to the area near SE 15th and Bryant on a report of someone being shot.

According to court documents, Young was in the driver’s side of a vehicle behind the steering wheel and been shot at least twice in the chest.

Officers also found an 18-year-old female victim who had been shot in the back, next to her spine.

Court documents state the female and Young went to a house to “squash beef” with someone when at one point, the suspect reached into his vehicle and pulled a gun out.

On Wednesday, an arrest warrant was issued for Tevarus Young for first-degree murder and shooting with intent to kill.