NEW YORK — Baby food made by a New York company and sold nationwide is being recalled because the jars may be contaminated by tiny shards of glass, the company said.

A customer called Beech-Nut Nutrition to say they found a small piece of glass in a jar of Stage 2 Beech-Nut Classics, alerting the company to the problem.

Beech-Nut Nutrition, based in Amsterdam, N.Y., said it has received at least one report of an oral injury connected to the food.

“Outside of this single report, we have no indication that any other jar of our Classics Stage 2 Sweet Potato & Chicken is affected, but as a company of parents and families we are acting with an abundance of caution,” the company said in a statement. 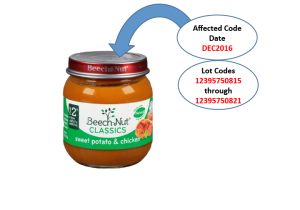 The jars are emblazoned by the establishment number “P-68A” inside the USDA mark of inspection and they expire in December 2016. Those jars of food are meant for kids 6 months and older.

Anyone who bought an affected jar of baby food can bring it to the store where they bought it for a refund or replacement, the company said.