WASHINGTON – Sen. Bernie Sanders on Thursday said he was prepared to rejoin the Democratic presidential campaign at “full blast” after experiencing a heart attack last week, with trips to Iowa, Nevada and New Hampshire on his post-debate itinerary. 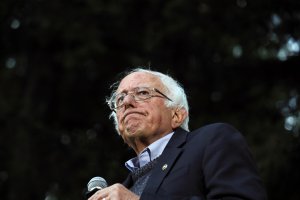 In an interview with CNN Chief Medical Correspondent Dr. Sanjay Gupta, Sanders described in detail the symptoms he experienced during a campaign stop in Las Vegas and, after being pressed about the gap between his diagnosis and its disclosure, insisted that he and his team had revealed the information in a responsible time frame.

“The people do have a right to know about the health of a senator, somebody who’s running for president of the United States — full disclosure,” Sanders said, pledging again release his full medical records. “But you know, the first concern that people had (was) to understand what was going on. Before we reveal information dribble by dribble.”

Sanders has over the past 48 hours discussed his ailment with reporters outside his home. He indicated at one point that he planned to scale back his frenetic schedule, potentially cutting down on the number of town hall events and rallies in a given day. On Thursday night, he suggested it would only be temporary pumping of the brakes.

“Well, what I mean is probably next week I’m not going to do four rallies a day,” Sanders said. “I think I’ve done more rallies than any other candidate who’s currently running for president of the United States. But I’m feeling great and we’re going to run a vigorous campaign. We’re working on our schedule right now, which is going to take us to Iowa, to Nevada, probably back to New Hampshire. We’re ready to go full blast.”

Describing the heart attack itself, Sanders recalled feeling discomfort during the Las Vegas event and “sweating profusely” before visiting an urgent care clinic, which referred him immediately to the hospital. He traveled there by ambulance. He also again expressed regret, as he did a few days ago, about not being more sensitive to earlier symptoms.

“I should’ve paid more attention to some of the symptoms that were occurring. You know, when you do four rallies a day and you run all over the country, you get tired. Everybody would get tired. But I was more tired than I usually have been, had more trouble sleeping than ordinarily,” Sanders said. “Occasionally I’d be up there at the podium and I’d feel a little bit unsteady. You know, one time I was just lifting, literally, holding the mic up to my arm and my arm hurt. Up to my mouth and my arm hurt. I should’ve paid more attention to those symptoms. So I hope that people learn from my mistake.”

On Thursday, the Sanders campaign posted a pair of videos — one featuring the candidate, direct to camera, discussing his experience and weaving into his case for “Medicare for All.”

“So I got to tell you, that even as I sat and lied down in that hospital bed in Las Vegas, this issue of the struggle that we are engaged in just, you know, permeated my mind,” he said. Later, he asked supporters, “At the end of the day, if you’re going to look at yourself in the mirror and you’re going to say, ‘look, I go around once. I have one life to live, what role do I want to play?'”

The second clip, hours later, was filmed in Sanders’ backyard. It showed him swatting at pitches, batting practice-style, in front of a small backstop. The message was clear: Sanders is preparing to get back into the swing of things. His in-person return to the trail is likely to come next Tuesday, at the CNN/New York Times presidential debate in Ohio. But before then, Sanders is now planning to appear remotely, via livestream, at the United Food and Commercial Workers’ forum on Sunday in Iowa.

Sanders’ Thursday interview with CNN came about nine days after the 78-year-old Vermont senator experienced “chest discomfort” at a campaign event. Last Friday, Sanders’ staff confirmed he had a myocardial infarction, commonly known as a heart attack. Every year about 790,000 Americans have a heart attack, according to the US Centers for Disease Control and Prevention.

With a myocardial infarction, one of the arteries that supplies blood to the heart becomes blocked, depriving the heart of oxygenated blood. Sanders told reporters this Tuesday that he had been “dumb” to ignore symptoms over the “last month or two,” when he had been more fatigued than normal. Without oxygenated blood, the heart muscle becomes damaged. The more time that passes without blood, the greater the damage.

To correct the problem, doctors at the Desert Springs Hospital Medical Center placed two stents in Sanders’ blocked artery. They noted that all the other arteries looked normal. The candidate spent two days at the hospital before heading home to recuperate at home in Burlington, Vermont.

Because this is not an open heart surgery, recovery typically takes seven to 10 days. To place the stents, doctors make a small cut in a blood vessel. Doctors thread a thin tube with a tiny balloon at the end up to the blocked artery. They then use the tool to open up the blockage so blood can flow again to the heart. The stents — in Sanders case there were two — remain in place to keep that artery open after the balloon is removed.

The doctors who treated him, Dr. Arturo Marchand Jr. and Dr. Arjun Gururaj said that his stay and treatment were “uneventful with good expected progress.”