DALLAS, Texas – After Botham Jean was fatally shot in his apartment last year, his former colleagues made a commitment to his family: They wouldn’t allow the memory of their friend and coworker to fade away. 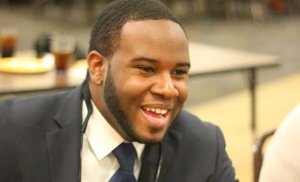 On Tuesday, PricewaterhouseCoopers, where Jean worked as an accountant, unveiled a portrait of their colleague in the company’s new Dallas office.

The artwork is crafted out of 10,000 pieces of oak sourced from Jean’s home state of Texas, painted in the vibrant colors of his native St. Lucia. Based on Allison Jean’s favorite photo of her son, the portrait is meant to evoke his warm and generous spirit.

“We wanted something that would capture Bo’s smile,” Scott Moore, managing partner for PwC in Texas, told CNN.

“He was just the most positive person about anything: never met a stranger, always was in a good mood, never had a bad day,” Moore said. “That was the thing we wanted to capture with the piece that we did on him, the energy he brought to everything he did and the impact he had on everybody.”

The artwork was designed by Texas-based artists Shane Allbritton and Norman Lee.

“We’re using native Texas wood as representative of his Texas identity,” Lee told CNN. “The colors that we chose, the paint was taken from colors of St. Lucia: the traditional dress, the textiles, the architecture, was very much behind the choices of color. Those also happen to speak to his idea of being a vibrant person and community leader.”

For Allbritton, the project hit close to home.

“My family has a common shared experience with a tragic shooting death in the family, so this type of project for me personally was perhaps a bit of catharsis for us,” she said. “It’s a labor of love and there’s much care that goes into it from us. It’s meant to be an uplifting celebration of life of Bo, rather than letting the tragedy define the story.”

The portrait hangs in one of the most visible parts of PwC’s Dallas office, Moore said, in a communal space on the 20th floor near where people gather to grab coffee or lunch.

In the days since the portrait went up, people have been stopping by either to take photos or interact with it in other ways, Moore said. Even people who don’t work at PwC have expressed interest in coming to see the tribute.

“It’s amazing to watch people walk by and touch it,” he said. “The artists were very encouraging when we did the unveiling on Tuesday. This wooden piece is something that you should touch. That’s what it’s there for. It’s been really neat to watch people that have connected with it.”

Other tributes to Jean’s legacy
PwC has been honoring Jean’s memory in other ways.

The firm named a room after their former colleague called the “Botham Shem Jean Difference Space,” a colorful area with a lot of light and moveable furniture. Moore described the room as a “very creative, collaborative space where we bring our clients together and do design thinking workshops to help solve some of the most complicated problems.”

In the days after Jean’s death, PwC encouraged its employees and others to share their memories of him on social media with the hashtag #BeLikeBo. Employees later gathered in a park in Dallas on what would have been Jean’s 27th birthday to eat Caribbean food and release butterflies.

The company held a nationwide “Day of Understanding,” which brought together employees across more than 150 companies to discuss race and unconscious bias in the workplace.

And they’re trying to ensure that other students follow in his footsteps.

“It’s neat to see that progressing forward and that his legacy is going to continue at Harding University,” Moore said. “I’m hopeful that in some point in time that some of those young people that go to Harding under the Botham Jean scholarship program will wind up working for PwC.”

On Friday, data from the Oklahoma State Department of Health shows that the state has had 82,520 confirmed cases of COVID-19 since March.

The celebration featured a parade, an honor guard and several proclamations. As police cars passed, Newman saluted each one.

Six Oklahoma schools are among the 367 National Blue Ribbon Schools named by the U.S. Department of Education.