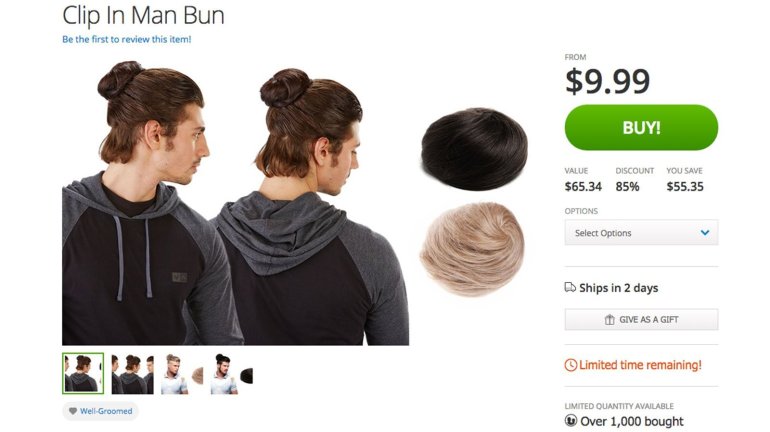 Celebrities like David Beckham and Kit Harington of ‘Game of Thrones’ have been seen sporting the up-do.

It’s a popular hashtag on Instagram, a social media photoshop trend and now everyone can test the look on themselves.

A company is capitalizing on social media’s man bun obsession.

Groupon is selling a perfect solution for any adventurous guy who wants to test out the trend but doesn’t want to put in the effort to grow out his hair.

The online company is targeting a specific kind of man – one “who wears many hats but no bun.”

The average man won’t have to feel envious of those with lengthy locks.

Thanks to a running deal on Groupon, every hipster, fixed-gear bicyclist and introspective Hollywood actor will be able to sport the do for less than $10, according to the ad.

Those interested in being part of the man bun trend may benefit financially.

According to Groupon, there’s money to be saved in future haircuts and grooming.

Who knows, those who wear the clip-on might even be able to grown their own someday.

More than a thousand buns have been sold, according to the site.

The attachable hairpiece is made of artificial hair and comes in a variety of hair colors.

YUKON, Okla. (KFOR) - An Oklahoma superintendent is getting honest with parents about the difficulty he experienced while planning for the school year during the COVID-19 pandemic.

A letter written by the superintendent for Yukon Public Schools is garnering praise online as he discusses the sleepless nights spent worrying about the safety of students and staff.

The briefing is planned for 5:30 p.m. Eastern and can be streamed live right here.

DeVos: Students returning to school will give families ‘options’