OKLAHOMA CITY (KFOR) – A new search and rescue canine will join Oklahoma Task Force 1 in a ‘Passing of the Leash’ ceremony on Friday. 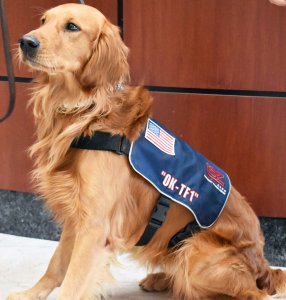 “Express, along with our more than 800 franchises, is committed to changing lives, whether that’s through employment or investing in life-saving resources in communities,” Bill Stoller, CEO of Express, is quoted as saying in a company press release. “It’s an honor to partner with these incredible organizations in the donation of Indy to Oklahoma Task Force 1.”

Indy was rigorously trained at the Ground Zero Emergency Training Center in Tuttle, Okla., which trained five of the six canines currently serving with Task Force 1. Indy will become number six, according to the Fire Department’s news release.

Ground Zero Emergency Training Center was founded by Barry and Becky Switzer. Barry Switzer said the canines are “the Heisman winners of canines since only 1 in 1,000 dogs can do what they do.”

Indy will be partnered with Firefighter Tyler Barry of the Moore Fire Department. 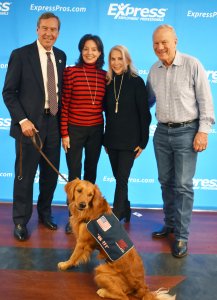 “In a world where professional search and rescue teams may be called upon in an instant, the support of caring community partners has never been more crucial,” said Oklahoma City Fire Chief Richard Kelley. “We know how important it is to have these resources at our disposal. When disaster strikes, we’ll be ready to respond.”

Task Force 1 is made up of personnel from metro-area fire departments and law enforcement agencies, and is deployed during disasters, such as hurricanes Harvey, Florence and Dorian.

“This group of dedicated professionals diligently trains and prepares for numerous disasters ranging from swift water rescue and confined space rescue to high-angle rescue and collapse rescue. The canine teams are integral components of OK-TF1,” the news release states.

The ‘Passing of the Leash’ will be held at 11:30 a.m. Friday in the Education and Outreach Room on the second floor of the Oklahoma City National Memorial & Museum.

“We are honored to host this Passing of the Leash,” Kari Watkins, Memorial & Museum Executive Director, said in the Express news release. “This is a critical part of our story, to Look Back and Think Forward, as we approach the 25th anniversary of the bombing.”

The event is open to the public. Those attending the ceremony should use the 6th Street entrance.