Kelli King was driving home from work Friday, listening to the news on the car radio, when she got a very nice surprise.

A ban on same-sex marriage involving members of the Cherokee Nation was overturned by the tribe’s attorney general in an opinion issued Friday.

King called her girlfriend, Brittany Nunley, who is Cherokee and shared the good news. 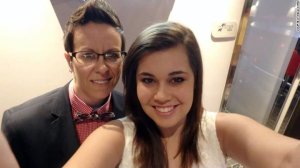 “I think its awesome,” Nunley told CNN. “I have been really proud of my Cherokee heritage and to be able to get a marriage license is just awesome.”

King, who said the couple met at a church softball game about four and half years ago, said she was excited to hear about the ruling.

“This is just another way we can incorporate her heritage into our lives and are thankful for opportunity,” King said.

He said the tribe’s constitution protects certain fundamental rights, among them the right to marry.

“The constitution affords these rights to all Cherokee citizens, regardless of sexual orientation and the Cherokee Nation, or any subdivision, must recognize validly issued civil unions, same-sex marriages, and same-sex domestic partnerships from other jurisdictions,” the opinion says.

The US Supreme Court ruled by a 5-4 vote in June 2015 that states cannot ban same-sex marriage.

Nunley said after it became legal in Oklahoma in 2014 and then nationwide through the landmark Supreme Court decision, she wondered whether the Cherokee Nation would also reverse itself.

“I was really excited and really proud to be a Cherokee. Like my nation is doing something for all its people,” she said from her home in Locust Grove, about 20 minutes from the tribe’s headquarters in Tahlequah.

Marriage is definitely in their future, King said. It’s been discussed in the past but they wanted to wait for it to be legal.

“It’s probably not too far off now,” she said.

Nunley said she’s just waiting for someone to pop the question.

The Cherokee Nation website says that with more than 317,000 citizens, it is the largest sovereign tribal nation in the United States.

Bill aims to keep politics out of schools

One killed in house fire