CHICKASHA, Okla. (KFOR) – Chickasha police have identified the two people who were shot and killed in Chickasha on Thursday.

The victims were identified as 66-year-old Stanley Hisel and 67-year-old Deborah Hisel, according to a Chickasha Police Department news release.

Chickasha police officers were called to a home in the 400 block of Colorado at around 9 a.m. Thursday, Jan. 16 after neighbors reported hearing gunshots.

“The first officer on scene got here. The suspect was outside the residence and fired a couple of shots toward our officer," Chickasha Police Chief Kathryn Rowell told News 4. "Then shortly thereafter he surrendered to the officer.”

The officer was not hit, and he did not fire back.

Police said the suspect, identified as 36-year-old Corwyn King, threw down his gun and surrendered. 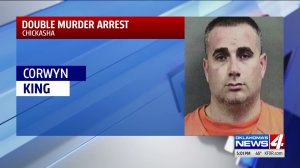 Other officers secured the scene and found Stanley and Deborah Hisel dead from gunshot wounds.

"Initial investigation reveals this to be an isolated incident, with suspect in custody, and no further danger to public safety," the news release states.

Police still don't know the motive behind the shooting.

“We don’t have any idea. At this point we have some theories," Chief Rowell said. "But I’m not even going to try to go down that road.”

The deadly shooting remains under investigation by Chickasha police and the Oklahoma State Bureau of Investigation.

(CNN) -- Charles Portis, best known as the author of the novel "True Grit," died Monday, according to his brother.

Portis' brother, Jonathan Portis, told CNN he passed away in a hospice in Little Rock, Arkansas. He was 86 years old.

CUSHING, Okla. (KFOR) - Authorities are investigating after a 40-year-old Cushing man was found dead next to his burning home Monday morning.

Investigators say Patrick McGuire was killed inside his trailer before it was set on fire, and all of it was caught on surveillance camera.