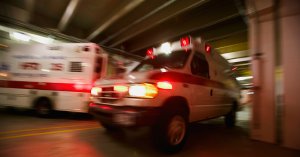 The boy, whose name was withheld, died at the scene of the crash at the intersection of U.S. Highway 183 and State Highway 9, one-and-a-half miles east of Hobart, according to an Oklahoma Highway Patrol news release.

The Dodge Ram's driver and two passengers, including a 14-year-old female, were all taken to Elkview Hospital. They were all treated and released from the hospital, the news release states.