OKLAHOMA CITY – Dozens of prisoners serving no-parole sentences for killings they committed as juveniles are expected to one day get a chance for release, including the Oklahoma teenager sentenced in the shooting of a college baseball player from Australia.

District Attorney Jason Hicks told a state House committee on Tuesday he likely can’t meet the new legal threshold for the life-without-parole sentence given to Chancey Luna, who was 16 when prosecutors say he shot and killed Chris Lane while the Australian was jogging down a street in Duncan, Oklahoma. At the time of his death, Lane was attending East Central University on a baseball scholarship.

Luna was one of three teenage boys who were accused of killing Lane.

“We were bored. We had nothing to do. We decided we’d kill somebody,” Duncan Police Chief Danny Ford recalled one of the alleged suspects saying.

Five years after the murder, it seems one of the suspects is already out of prison.

Edwards was originally sentenced to 25 years in prison for his role in Lane’s death, with 10 years of that sentence being suspended. 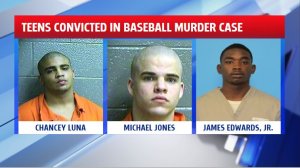 Now, online records from the Oklahoma Department of Corrections indicates that Edwards has been released from prison and is currently under GPS monitoring

Lawmakers nationwide are grappling with how to resentence juveniles after the U.S. Supreme Court determined such sentences should be reserved only for the rarest cases.