Officers O’Kelley and Perez conducted the stop near Glen Smith and Frisco Street around 10 p.m. Saturday.

Officers immediately smelled a strong odor of marijuana emitting from the vehicle, but none of the passengers inside had a medical marijuana license.

Upon further investigation, the officers found about 5 grams of marijuana, a large plastic bag containing 1.03 pounds of suspected methamphetamine, a 12 gauge shotgun, and a quantity of cash- apparent proceeds from drug sales. 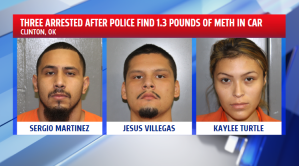 Sergio Martinez, 23 of Clinton, was charged with Operating a defective vehicle, Driving while license is suspended, Failure to comply with compulsory insurance law, Aggravated trafficking of illegal drugs, Use of a firearm while committing a felony,  and Possession of a controlled substance.

Jesus Villegas, 20 of Clinton, was charged with Aggravated trafficking of illegal drugs, Possession of firearm after a former felony conviction, possession of a firearm with altered ID during the commission of a felony, and Possession of a controlled substance.

Kaylee Turtle, 21 of Clinton was charged with Aggravated trafficking of illegal drugs, Use of a firearm while committing a felony, and Possession of a controlled substance.  She was also booked for outstanding arrest warrants in a different case.