The Senate historian says it was the first time a vice president had to break a tie on a Cabinet nomination.

Two Republicans joined Democrats Tuesday to vote to derail DeVos’ nomination. Democrats cited her lack of public school experience and financial interests in organizations pushing charter schools. DeVos has said she would divest herself from those organizations.

Republicans Susan Collins of Maine and Lisa Murkowski of Alaska fear that DeVos’ focus on charter schools will undermine remote public schools in their states.

In an earlier tweet, President Donald Trump wrote “Betsy DeVos is a reformer, and she is going to be a great Education Sec. for our kids!” 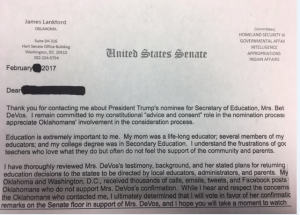 support the pick. KFOR received a copy of a letter sent by Lankford’s office confirming this correspondence.

We received more than1,000 phone calls and letters on the nomination of Mrs. Betsy DeVos. It is common to receive that type of feedback on a hot political issue that is receiving national media coverage. Our office policy is to not disclose the content of our constituent correspondence to respect the privacy of those that contact our office. The Senator appreciates feedback from constituents and respects any Oklahoman that calls, visits, or writes his office to voice their opinion.

“Oklahomans elected President Trump by a very wide margin, and therefore, they want the president to build his cabinet and government. Senator Lankford believes that millions of Americans have elected this president, and he therefore deserves to hire his team.” –Aly Beley, Spokesman, Senator James Lankford (R-OK)

Click here for a break down of the full vote

GRAND RAPIDS, Mich. (WOOD) — The parents of infant twins will have to adopt their own children after two judges denied them legal rights to the babies, who were born through a gestational surrogate.

WASHINGTON (WGN) — A 4-year-old boy in Washington, D.C. wanted to thank the National Guard for protecting the neighborhood — and he did it with cookies.

Kavi Sadar's mother, Janet, said it was his idea to bake the guard members cookies. They live close to the capital and Janet said after the riots on Jan. 6, it has been a little scary in their neighborhood.

(NEXSTAR) – Before leaving office former President Trump ensured that his extended family would receive protection from the U.S. Secret Service for the next six months, according to several reports.

The Washington Post, citing three people briefed on the plan, reports that Trump instructed the elite team of agents to protect not only himself, wife Melania and their son Barron, as provided by federal law, but also 14 extended family members.