OKLAHOMA CITY – Approximately 10 cows are on the loose on an interstate and city streets in southwest Oklahoma City Thursday evening after a truck overturned.

The Oklahoma City Fire Department says a cattle truck overturned near S.W. 59th and I-44. 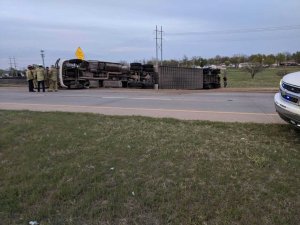 “Cows on the loose on the interstate AND city streets,” fire officials tweeted.

TAC 5: Overturned cattle truck SW 59 & I-44. Cows on the loose on the interstate AND city streets. Some must be euthanized, but some will be okay. BE AWARE and CAUTIOUS! Cows reported as far away as 53rd and Independence. 7:43 pm

The truck was hauling 75 cows. Fire officials believe 8-10 of them escaped while the others are still on the trailer.

Some of the cows will have to be euthanized, and others are injured.

TAC 5 Update: Overturned cattle truck at SW 59 and I44 was hauling 75 cows. We estimate 8-10 escaped. The others are still on the trailer: some alive, some injured, some hopefully okay. Driver being evaluated but appears to be okay so far. BF 7:55 pm

The driver is being evaluated, “but appears to be okay so far.”

Officials are asking everyone to be aware and cautious.

Cows have been reported to be as far away as 53rd and Independence.