OKLAHOMA CITY - Just one day after a truck driver struck a heavily traveled bridge, collapsing a portion of it onto the street below, contractors are already working to clean up the mess.

Around 2:40 p.m. on Thursday, the May Avenue bridge that crosses over Northwest Expressway collapsed after a semi hauling a boom lift hit the bridge.

Friday afternoon crews began cleaning up the mess of concrete sitting on Northwest Expressway from the May Avenue bridge collapse the day before.

The driver of the truck told police he passed under the other side of the bridge earlier with no issue.

One side of the bridge has a maximum height of 14 feet and eight inches.

The side that collapsed only has a maximum height of 14 feet and four inches. 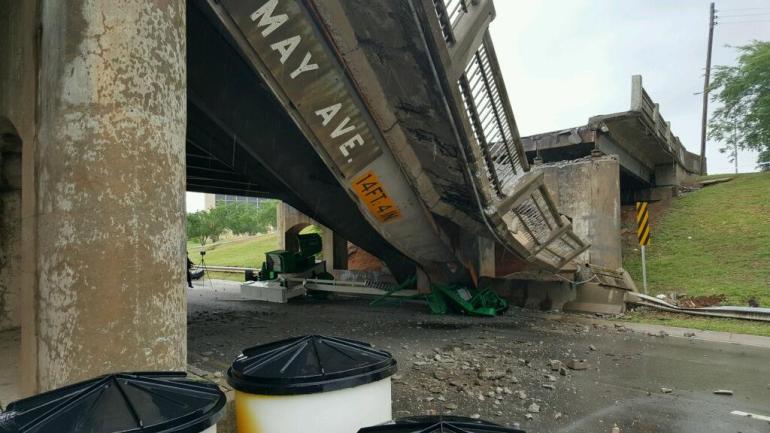 On Friday, contractors immediately began cleaning up the mess.

City officials say the clean up will take two to three days and if all goes well with that, Northwest Expressway could reopen sometime next week.

Repairs to the bridge will obviously take a lot longer, possibly two to three months.

Officials say the collapse of the bridge was not a design or maintenance-related issue.

“It was a heavy semi tractor trailer also carrying construction equipment.  Obviously, a lot of weight hit it.  I can tell you from visual inspection there are three very, very large beams that are severely damaged,” said Oklahoma City Public Works Director, Eric Wenger.

The 575 bridges maintained by the City of Oklahoma City are inspected every other year.

The May Avenue bridge at Northwest Expressway was last inspected in August of 2014.

Some maintenance items were noted but nothing structural.

Officials say early reports indicate the bridge can be fixed and does not have to be completely replaced.

“At this time, it doesn’t appear that there’s any damage to the eastbound portion of the bridge on Northwest Expressway on May,” said Wenger.

Police said the driver of the semi truck was 32-year-old Matthew Haney.

According to Haney’s LinkedIn profile, he just started driving for Sunbelt Rentals this month.

He’s been a delivery driver for several different companies since 2010.

The city does have the right to seek compensation for repair costs if a private party is responsible for damaging public property.

“All our bridges are clearly marked and I think you’ll see from the photographs there’s a bright orange with very large letters, markings on all the Oklahoma City bridges,” said Wenger.

And while he clearly couldn’t have known it, there is great irony in the slogan at the top of Haney’s LinkedIn page.

It reads, “Drive through what holds you back.”

You can still use the May Avenue ramps because they are not affected by the bridge.