BATTLE CREEK, Mich. (AP) – Defiant in the face of a historic rebuke, President Donald Trump labeled his impeachment by the House of Representatives on Wednesday “a suicide march” for the Democratic Party. 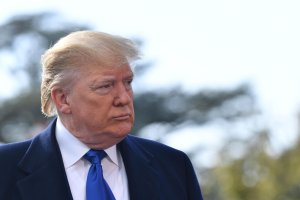 “Crazy Nancy Pelosi’s House Democrats have branded themselves with an eternal mark of shame,” Trump told the crowd at a campaign rally in battleground Michigan, where he took the stage just minutes before becoming only the third president in U.S. history to be impeached. “It’s a disgrace.”

It was a dramatic and discordant split-screen moment, with Trump emerging from a mock fireplace like Santa Claus at the Christmas-themed rally as the impeachment debate in Washington was underway.

As he spoke – seemingly unaware of the unfolding votes for a stretch – the House voted to impeach him on two counts. The first charges him with abuse of power for allegedly pressuring the president of Ukraine to investigate his Democratic rivals while crucial U.S. security aid was being withheld. The second charges him with obstruction of Congress for stonewalling investigative efforts.

While Trump and his aides have tried to brush off the significance of the vote – noting there is little chance he will be convicted by the Republican-controlled Senate and removed from office – allies say Trump has been fuming over the stain that impeachment will leave on his legacy.

Yet even as Trump slammed his impeachment as “illegal” and accused Democrats of demonstrating “deep hatred and disdain” for voters, he spent much of his speech zigzagging through a litany of unrelated topics. He offered an extended riff on U.S. pilots being cuter than Top Gun star Tom Cruise, went after Democratic presidential candidate Pete Buttigieg’s difficult-to-pronounce last name and reveled – yet again – in his 2016 victory.

And after a day of harsh tweets, Trump at times projected a less-concerned demeanor.

“It doesn’t really feel like we’re being impeached,” he said, later adding: “I don’t know about you, but I’m having a good time. It’s crazy.”

Trump also worked to highlight the Republicans who have stood with him, telling the crowd that the Republican Party has “never been so united” and predicting victory in 2020.

He unleashed plenty on Democrats, declaring, “After three years of sinister witch hunts, hoaxes, scams, tonight the House Democrats are trying to nullify the ballots of tens of millions of patriotic Americans.

Aides had said that Trump would wait to see the House vote before coming out to address the rally, but he didn’t wait, appearing onstage ahead of the votes and promising “the best speech you’ve ever heard.”

Throughout the day, Trump had stared down the impending vote as he has every obstacle in his presidency: by broadcasting his grievances via tweet.

“Can you believe that I will be impeached today by the Radical Left, Do Nothing Democrats, AND I DID NOTHING WRONG!” Trump wrote in one of 45 tweets posted before noon. He asked his followers to “Say a PRAYER!”

Trump’s urgency appeared to escalate as he switched to all capital letters: “SUCH ATROCIOUS LIES BY THE RADICAL LEFT, DO NOTHING DEMOCRATS. THIS IS AN ASSAULT ON AMERICA, AND AN ASSAULT ON THE REPUBLICAN PARTY!!!!”

As the impeachment debate wore on, Trump aides, including White House counselor Kellyanne Conway, fanned out across Capitol Hill to bolster the president’s message that impeachment is helping Republicans and damaging Democrats. Vice President Mike Pence got to Michigan ahead of Trump for a daylong bus tour before the Battle Creek rally.

Serving as a warm-up act for Trump at the rally, Pence labeled the impeachment drive “a disgrace” and told the crowd that Democrats were “trying to impeach this president because they know they can’t defeat this president.”

He said Pelosi and the Democrats are “having their say tonight, but the Republican Senate is going to have their say in January.”

Conway said recent polling and the influx of money suggest “this entire exercise has blown up in the Democrats’ face.” Polls indicate the public is divided over whether Trump should be impeached and removed from office, though opinions have generally remained steady.

Trump’s campaign has experienced a surge in contributions and volunteers during the impeachment inquiry, and aides were hoping to raise an additional $2 million Wednesday ahead of the votes.

Rep. Kevin McCarthy, the House minority leader, and Rep. John Ratcliffe, R-Texas, said they were among a group of GOP lawmakers who met with Trump at the White House on Tuesday evening to talk strategy about Wednesday’s House session and the likely Senate trial in January.

McCarthy insisted that Trump remains focused on moving forward with his agenda, despite the implications for his legacy.

“Anybody else, this would be traumatic for them,” McCarthy said. “I’ve never seen a man so strong. He is focused on what the American people need.”

It was a message repeated by White House press secretary Stephanie Grisham, who insisted on “Fox & Friends” that “I must tell you that while he’s frustrated, he is also so focused, and he is leading our White House and keeping us calm and telling us, ‘That’s OK, we’re going to move forward, we’re focused, this is going to take us through to 2020.'”
___
Colvin reported from Washington. Associated Press writers Aamer Madhani and Kevin Freking in Washington and Jonathan Lemire in New York contributed to this report.

OKLAHOMA CITY (KFOR) - While many school districts have opted to move forward with virtual learning due to the coronavirus pandemic, one local school says online learning was never an option for their students.

Positive Tomorrows serves approximately 100 students who are experiencing homelessness in the heart of Oklahoma City.

BOSTON (AP) — Big house parties and weddings, summer camps, concerts, crowded bars and restaurants, shopping trips without masks — Americans' resistance to curbs on everyday life is seen as a key reason the U.S. has racked up more confirmed coronavirus deaths and infections by far than any other country.

The nation has recorded more than 155,000 dead in a little more than six months and is fast approaching an almost off-the-charts 5 million COVID-19 infections.