Around 4 p.m. on Oct. 22, deputies with the Oklahoma County Sheriff’s Office were called to a burglary in the 19000 block of E. Reno Ave.

Authorities learned that the victim saw a man coming out of her barn, pushing a four-wheeler. When deputies arrived nearby, they spotted a man matching the description of the alleged suspect.

Investigators say the suspect “then raised a rifle in the direction of the investigators” before they were able to stop and give him commands. At that point, the arrest affidavit states that man put the rifle on the ground and surrendered.

Authorities say they were able to take David Rasmussen into custody and bring him back to the scene of the alleged crime.

The affidavit states that the homeowner told deputies that he “had a contract with Rasmussen and a Gerald Taylor to do some work on his farm where his residence is and his farm in Kingfisher. [The victim] continued by stating neither Rasmussen nor Taylor finished the work so he cut them [loose.] [The victim] stated they had both been to both barns and he has had several items stolen from the Kingfisher farm, as well as his home.”

Deputies say they were also able to arrest ‘Gerald Taylor,’ who was parked at the gate to the property.

While investigators were on the phone with one another, Rasmussen reportedly began yelling, “It was me, I did, I confess to everything. Just take me to jail.”

After taking both of the suspects to jail, investigators say they brought the victim to a shed where the men were living.

Once there, they found “a trailer, two fuel tanks, a generator and a large propane tank” that had been stolen from his farm, along with several other pieces of property.

Several days later, deputies received a call from the Nederland Police Department in Texas where officers were investigating a stolen identity case.

Officials say that is when they learned that ‘Gerald Taylor’ is actually David Jolly, who was a wanted fugitive from Texas.

Rasmussen was arrested on six counts of possession of stolen property, possession of an offensive weapon while committing a felony, second-degree burglary, and engaging in a pattern of criminal behavior.

Jolly was arrested on six counts of possession of stolen property, second-degree burglary, false personation, and engaging in a pattern of criminal behavior. 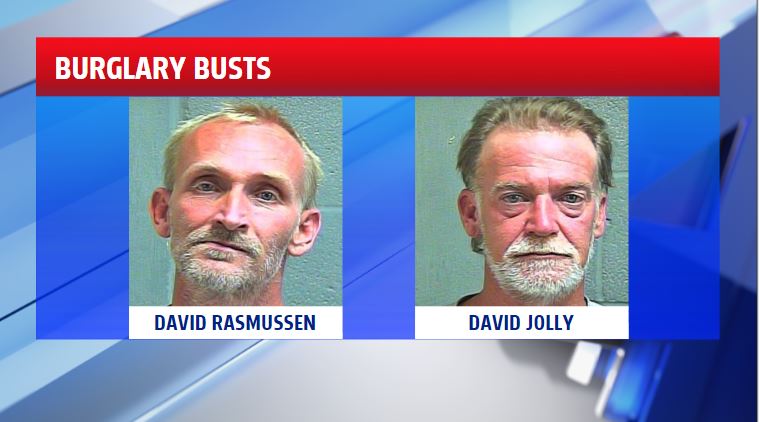 A ‘dire situation’ for over 12,500 migrants under the bridge in Del Rio, Texas

Moderna vaccine is most effective against hospitalization from COVID-19, CDC study finds

“Our customers have thin margins in their families and so we certainly cannot afford for any of their resources to be removed from them,” said Casey White, the External Communications Director for DHS. “We’re very concerned about customers falling victim to this.”

YUKON, Okla. (KFOR) – A busy crook is suspected of hitting more than 40 cars in one night. This all went down at The Park on Westpointe apartments in Yukon, part of the Oklahoma City metro area, Monday night into Tuesday morning.

Kayla Broomfield said her husband was headed to work Tuesday when he had to come back into their apartment to tell her the news.

PERRY, Okla. (KFOR) – Three men helped save the lives of two teenage boys Tuesday when they helped pull them from a fiery crash. They were honored at a local rodeo in Perry, Okla., Friday night.

The young 14 year old and 16 year old boys are lucky to be alive after the single-car accident. Three people ended up stopping and saving their lives.

A ‘dire situation’ for over 12,500 migrants under the bridge in Del Rio, Texas

Moderna vaccine is most effective against hospitalization from COVID-19, CDC study finds

Oklahoma City neighbors say this isn’t the first incident with violent pack of dogs after saving 8-year-old, grandmother from attack

Where Afghan refugees are headed in the U.S. by state

‘We will be ready’: Capitol Police prepare for Saturday rally

‘Pandemic in a pandemic’: New push in Congress aims to prevent health care worker suicides as COVID rages on