EXETER, Mich. – An upstate New York man faces several charges after his dog appeared to have chewed off one of its own limbs, state police say. 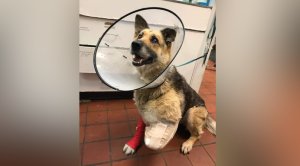 The dog, Zoe – who appears to be an older German shepherd mix – was found outside in a plastic pet crate lined with hay.

Zoe was chained up with no food or water, according to police. One of her bowls was frozen and covered in snow, WWLP reports.

A UPS driver noticed Zoe and reportedly called 911, telling the operator there was a dog that appeared to have had its front left leg “blown off.”

Zoe was treated at Susquehanna SPCA before being transferred to the Cornell University of Veterinary Medicine.

Veterinarians determined that Zoe likely chewed off her own leg after they found bone fragments in her stomach, WWLP reports. She was also treated for other unspecified injuries and scarred ear tips.

Pritchard has a court appearance scheduled for Dec. 4.