OKLAHOMA CITY (KFOR) – A driver connected to a horrific crash in northwest Oklahoma City is now facing charges for the accident.

On Nov. 1, emergency crews rushed to the scene of a multi-vehicle accident near N.W. 63rd St. and May Ave.

Witnesses told News 4 the driver of a dark blue Dodge Charger was going south on May when he ran a red light, hitting a silver car. The impact knocked the silver car down the street for more than a block.

“My light had turned green and his light was obviously red,” Kaitlyn Newell said.

The driver of the silver car died on the scene, while a passenger in that car died at the hospital.

In all, four cars were involved including an Oklahoma State Employment Security Commission van.

Now, we’re learning more about what led up to the deadly crash.

According to a probable cause affidavit, investigators say Reed “disregarded the red traffic light in excess of 80 MPH” as he continued south on May.

“The actions of [Marvin Ellis Reed] were inherently dangerous based on the time of day and the amount of pedestrian and vehicular traffic in the area. [Ellis Reed] ran a red light at two times the speed limit and collided with a vehicle causing the death of two people,” the affidavit states.

Authorities say after the crash, it was determined that Ellis Reed had a suspended Oklahoma driver’s license and the 2015 Charger he was driving was stolen. 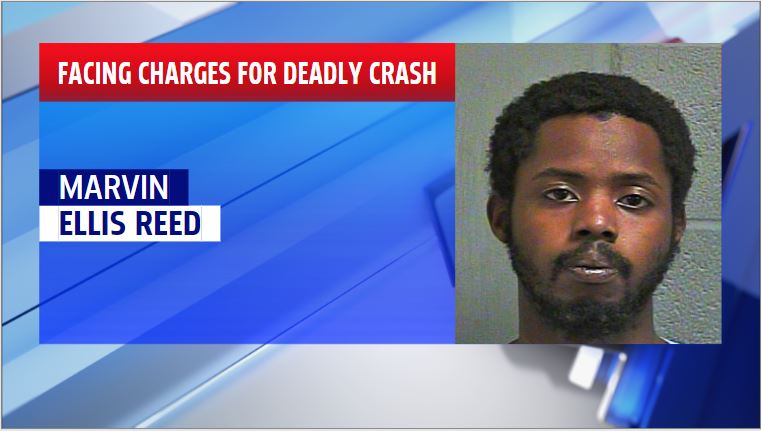 According to court documents obtained by News 4, Ellis Reed is being charged with two counts of second-degree murder, two counts of causing an accident while driving without a valid license, unauthorized use of a vehicle, driving while privilege suspended, and reckless driving.
35.46756-97.516428

IN YOUR CORNER: Disabled man hoping for tricycle defrauded by suspect site

(WJW) – Dr. Anthony Fauci, the director of the National Institute of Allergy and Infectious Diseases, says not to let your guard down as the omicron variant, a new strain of COVID-19, spreads internationally.

Fauci appeared on "Weekend TODAY" on Saturday, where he remarked that it was possible the omicron variant is already in the United States.

TEXAS COUNTY, Okla. (KFOR) – A Texhoma, Okla., man died in a hospital Friday from injuries he suffered after his vehicle was struck by a semi-truck on Tuesday.

OKLAHOMA CITY (KFOR) – Black Friday started one of the most important shopping seasons for Oklahoma City small businesses. This year, the global supply chain shortage caused by the COVID-19 pandemic is causing concern for some.

"The last year-and-a-half has just been all about making those pivots," said Audrey Falk, owner of Shop Good, located in downtown OKC.

IN YOUR CORNER: Disabled man hoping for tricycle defrauded by suspect site