KSWO , a Lawton, Okla. television station, is reporting that Alan Hruby, the only surviving family member, has confessed to the murders of his mother, father, and sister.

50-year-old John Hruby, the publisher of the Marlow Review newspaper, his wife, 48-year-old Tinker, and their 17-year-old daughter, Katherine, were all killed.

John and Tinker’s son, Alan Hruby, a student at the University of Oklahoma, is now in jail for a probation violation. 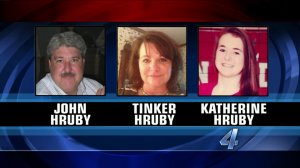 The police chief says he was notified around 9:30 p.m. Tuesday night about Hruby’s confession.

KSWO is also reporting that the family was shot to death, but investigators have not confirmed this information.

The family’s bodies are now at the medical examiner’s office and all three cases are pending at this point.

Duncan Police say they had some early reports that the deaths could have been related to carbon monoxide poisoning.

However, that is not the case, and the deaths are being investigated as a triple homicide.

Police believe the last time anyone heard from the Hruby’s was Thursday.

The family’s housekeeper found the bodies Monday morning, and now police are trying to figure out when they were killed.

However, police say the dogs are alive and are now in the care of someone close with the family.

Alan Hruby was brought into custody yesterday for unrelated charges and that’s police say that’s when he allegedly confessed to the murders.

Alan pleaded guilty earlier this year to opening a credit card in his grandmother’s name and spending almost $5,000 during a trip to Europe.

This is a developing story.  Please refresh this page often for updates.

CLICK HERE TO READ MORE ON THE HRUBY DEATHS

Just before 2 a.m. on Tuesday, troopers with the Oklahoma Highway Patrol attempted to pull over a car near S.E. 44th and I-35.

JERUSALEM (AP) — An Israeli hospital on Monday said preliminary research indicates a fourth dose of the coronavirus vaccine provides only limited defense against the omicron variant that is raging around the world.

ALBANY, N.Y. (WTRN) - Intuit, the company that owns Turbo Tax, said that it would no longer be participating in the IRS's Free File program in July. For years the company offered free e-file services and was featured on the IRS website.

Turbo Tax does have a free file option on its website, even though they are not participating in the IRS's program. There are limitations on who can use their free service and people who have used Turbo Tax's free file service in the past may find themselves unable to this year.

Out of this world! 555.55-carat black diamond lands in Dubai

Within the ashes full of memories, a wedding ring is found

Former NFL player dies while being held in Kansas prison

Should lawmakers be banned from trading stocks?

'Until all is well, it's not the end': Martin Luther King's family spotlights voting rights on MLK Day

“I had to get out of the way,” Off-duty officer talks about chaotic shooting at Walmart