He’s grateful to be alive after a recent swimming accident. 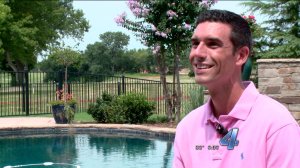 Michael was in a neighbor’s pool when a child jumped in, landing on top of the 37-year-old father of 4.

“As soon as it hit me, it paralyzed my entire body, my eyes were functioning, but nothing else was working,” Buckingham said.

Michael sank to the deep end; 6 to 8 minutes passed before anyone realized something was terribly wrong.

“He wouldn’t just go under water and put his head on the floor. Unless he was trying to do a breathing thing. He wouldn’t scare us that he was dying,” Michael’s son, Braden, said.

Bryson and Braden each grabbed a hand and pulled their unconscious dad to the sundeck. Little Beckett retrieved a raft to prop his head.

“We just tried to get help,”Braden said.

Michael Buckingham would spend several days in ICU. The prognosis was bleak, until friends launched a Facebook page “Prayers for Buck.”

Michael has made a miraculous recovery. He’s grateful to his courageous boys, EMSA medics, and above all, God — for giving him a second chance at life, when few others thought it was possible.

“No way I shouldn’t be here at all. And its a miracle from God. and so I’m thankful everyday,” Michael Buckingham said.
Report a typo

(NEXSTAR) – Nearly 20% of asymptomatic COVID-19 patients will eventually present “at least one” common condition associated with long-haul COVID-19, according to the results of a study published this week.

Those conditions included pain, breathing difficulties and hyperlipidemia (high levels or lipids, or fats, in the blood), among other symptoms reported by long-haulers.

OKLAHOMA CITY (KFOR) – A measure that would combat traumatic brain injuries in Oklahoma will not become law after Gov. Stitt decided not to sign the bill.

House Bill 1010, by Sen. David Rader and Rep. Trish Ranson, would create the 11-member Advisory Council on Traumatic Brain Injury to provide guidelines and give advice to the Oklahoma State Department of Health.

MYSTERY WIRE -- Another member of the United States Congress is talking openly about UFOs and the expected upcoming UFO report from the office of the Director of National Intelligence.

Some companies want employees back in the office; some workers hesitate

OESC warns of fake account trying to get claimant information

These cities are home to the worst drivers, insurance group finds

9 years of DACA, Dreamers still wait for path to citizenship

9 years after DACA, Democrats push for path to citizenship