EDMOND, Okla. – Just days after police were called to an Edmond high school, officials say one person has been taken into custody.

Bryson Burnett, 18, has been arrested on hoax terroristic threat, using a computer to cause fear, and false impersonation charges. 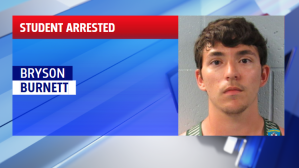 Police say Burnett made the threats under another student’s name in order to set them up and get them in trouble.

On Wednesday, officials at Edmond Santa Fe High School said administrators received information about a threat that was circulating on social media.

At the time, school leaders said all known persons of interest had been contacts and were interviewed by law enforcement officers.

On Friday, officials said they were dealing with a second threat, which was also posted on social media.

Officials say the Edmond Police Department is investigating the threat, and say the suspect will face criminal charges.

“We are aware of a second threat to our school, made this morning via social media. Edmond Police Department is currently investigating the origins of this threat. Local authorities have been working since the first threat two days ago, and they had already made significant progress in the investigation when the additional threat was posted earlier this morning. It is the goal of law enforcement to identify the person responsible and to quickly make an arrest. Police believe that the suspect has left a digital footprint that will identify him/her. Pending results of the investigation, law enforcement will present charges in OK county court.

We are working closely with the police to assist in the investigation. Should the suspect be a student, we will apply school consequences to the fullest extent possible and assist authorities in any possible criminal prosecution. Please know that the safety and security of our students and staff will continue to be our primary focus as we work with law enforcement on this and related issues,” a note from Principal Jason Hayes read.

On Friday afternoon, officials with the Edmond Police Department announced that a suspect has been taken into custody.

“The Edmond Police Department was informed of the threatening social media postings directed at Santa Fe High School over the last few days. Our School Resource Officers and Forensic Detectives have been investigating the threat since Tuesday. We have identified the suspect responsible for the threatening social media posts and taken him into custody off campus. Due to the cooperation between the Edmond Public Schools and the Edmond Police Department we were able to quickly identify a suspect and place that person under arrest for charges under the Oklahoma Antiterrorism Act.”