This was necessary, because the new Edmond middle school, Heartland, will be opening next year.

However, eight elementary schools will now be split when they go to middle school. 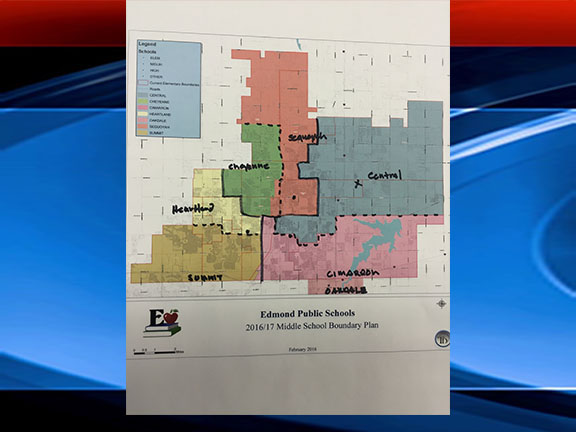 “But, we don’t have a split in the middle of their education. It’s more toward the first,” said Edmond superintendent, Bret Towne.

A committee of 37, made up of parents, teachers and administrative staff came up with the new lines.

The superintendent said they did a good job of working together.

“They really did have a district mindset, because some of them even were suggesting things that actually would be detrimental to their area for the good of the whole,” Towne said.

Perhaps the biggest change, Centennial Elementary in the northeast part of the district will now go to Central Middle School instead of Sequoyah.

Towne said a big goal of this redistricting was shifting some of the numbers away from Sequoyah Middle School and North High School.

“North’s current attendance zone is 48 percent of all the land mass in Edmond and Sequoyah’s is 42 percent.  So, as they build in those areas, it really is unsustainable to expect that those schools can continue that way,” Towne said.

It’s important to note this is just a proposal.

There will be two public forums to get parent input.

The school board can accept the plan as is or make changes to it before voting on it.