WASHINGTON (CNN) – PSA for all the Area 51 stormers, chemtrail believers and climate change deniers: Edward Snowden has searched the depths of the US intelligence networks and can report the conspiracy theories are not true. 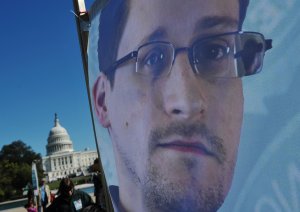 As a former employee of the CIA and contractor for the National Security Agency, Snowden had access to some of the nation’s most closely held secrets.

And, like any curious mind with access to the CIA’s version of Google might do, he went in search of answers to some of society’s most pressing questions.

As it turns out, the US government is not aware of any intelligent, extraterrestrial life, he says.

“For the record, as far as I could tell, aliens have never contacted Earth, or at least they haven’t contacted US intelligence,” Snowden writes in his recent memoir, “Permanent Record.”

“In case you were wondering: Yes, man really did land on the moon. Climate change is real. Chemtrails are not a thing,” he adds.

The NSA whistleblower addressed the conspiracies again on an episode of “The Joe Rogan Experience” podcast, released Wednesday, saying “there’s no evidence” of aliens and chemtrails and the like.

“But the idea that we’re hiding them — if we are hiding them — I had ridiculous access to the networks of the NSA, the CIA, the military, all these groups. I couldn’t find anything,” he continued. “So if it’s hidden, and it could be hidden, it’s hidden really damn well, even from people who are on the inside.”

To be fair, the man revealed a massive program of surveillance run by the US government and is now living in exile in Moscow as a result. If the US government was keeping secrets about aliens and UFOs in Area 51, surely Snowden would have been the one to find out.

So why are people on the internet so keen to believe in conspiracy theories? That’s a question Snowden does have the answer to.

“Everybody wants to believe in conspiracy theories because it helps life make sense,” he said on the podcast. “It helps us believe that somebody is in control, that somebody is calling the shots.”

McALLEN, Texas (Border Report) -- The federal government has released an "Environmental Stewardship Plan" that acknowledges several species and wildlife will be "adversely affected" by the construction of 11 miles of new border wall in South Texas, but critics point out many of the wall panels are already built.

NEW ORLEANS – Tulane University football in conjunction with the American Athletic Conference announced today that its Friday, Oct. 16th matchup with SMU will now be aired live on ESPN. The game is set for a 5 p.m. kickoff.

Download the official mobile app of Tulane Athletics. Now, you can stay in touch with the Green Wave anytime and anywhere on your Android or iOS mobile device.

Follow Tulane football on Twitter, Facebook and Instagram at @GreenWaveFB. Follow Tulane Athletics on Twitter, Facebook and Instagram. WE ARE NOLA BUILTTulane University is located in the city of New Orleans. It is a city built on tradition and resiliency. The lessons Green Wave student-athletes have learned through their connection with this university and city have BUILT doctors, lawyers, business leaders, conference champions, all-conference players, All-Americans, professional athletes and NCAA tournament teams. The city of New Orleans has shaped us into who we are today. We are One City. We are Tulane. We are NOLA BUILT. Check out our story at NolaBuilt.com.

WASHINGTON (NEXSTAR) -- A new investigation reveals how the Trump campaign used Facebook ads to deter certain people from going to the poll in 2016, according to an investigation from Channel 4 News in the United Kingdom.

The news organization analyzed data on 200 million voters that it obtained from a source. In the database, millions of voters were marked 'deterrence' -- which Channel 4 News says meant the campaign wanted them to stay home on Election Day.

Pennsylvania mom, daughter get life terms in slayings of 5 relatives