ENID, Okla. – The Enid Police Department says they have arrested six suspects in connection to a violent home invasion that left a 41-year-old mother of five dead.

Three days after the attack, officials with the Enid Police Department confirmed that Baez died from her injuries.

Just over a week after Baez was attacked, officers arrested six in connection to her attack and subsequent death. 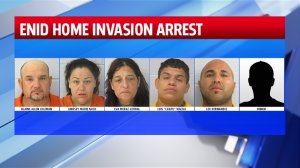 Police say they anticipate changes or additions to the charges as the District Attorney’s Office begins to evaluate the case and the investigation progresses.

No other specific details are being released as this investigation remains very active and ongoing.