WALTERS, Okla. – The family of a man who was removed from life support Monday claims he was beat to death by police officers. An investigation into the force used by law enforcement is now underway in Walters.

An Oklahoma State Bureau of Investigation spokesperson tells News 4 they are looking into what happened while police served a warrant for a stolen gun.

The family of 55-year-old Michael Cooper said the door to his house was busted down and he was thrown to the floor, striking his head. He was then cuffed and taken to a hospital in Lawton, where he was later declared brain dead.

“I wasn’t there, but they took him to the floor, and my little sister to the floor and handcuffed them… hit his head on the floor,” said Ric Cooper, Michael’s older brother.

Police were reportedly searching the house for the stolen gun they believed to be in the possession of Michael’s nephew, who lived in the residence.

News 4 called the Walters Police Department and Cotton County Sheriff’s Office. They had no comment and referred us to OSBI.

Ric said area police were familiar with Michael. Some officers were actually related to the Cooper family.

Ric said they knew Michael had a lifelong battle with alcohol, Michael had turned himself in for public intoxication before and his blood-alcohol level was way over the legal limit when he was admitted Saturday night to the hospital.

“He had some problems, he had some run-ins with the police but they knew him. They knew he wasn’t dangerous,” Ric said. “He was kind of the ‘Otis Campbell’ of the area. They knew he was harmless, and I don’t know why they had to rough him up… He wasn’t trying to fight back at the time. I know he wasn’t.”

The family said the nephew is on the run. They don’t know where he is.

Michael was declared brain dead on Sunday. The family decided to take him off life support around 4 p.m. Monday. 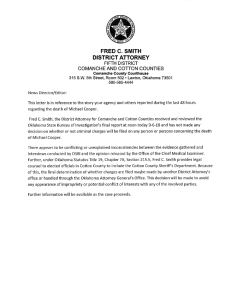 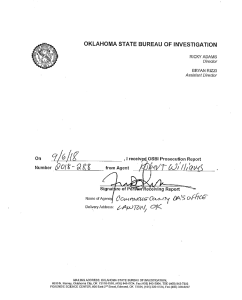 The operator of the nation's largest gasoline pipeline — hit earlier this week by a ransomware attack — announced Saturday it has resumed “normal operations," delivering fuel to its markets, including a large swath of the East Coast.

Georgia-based Colonial Pipeline had begun the process of restarting the pipeline's operations on Wednesday evening, warning it could take several days for the supply chain to return to normal.

A man in California was arrested after he chased his estranged wife onto a field with kitchen knives during her child's sporting event, police said Saturday.

The mother was watching the child warm up at a field in Garden Grove around 7 p.m. Friday when the child alerted her that the father was coming up from behind her, Garden Grove Police Department officials said.

Oklahoma child rescued after getting stuck in quicksand

Suzanne Morphew’s husband, accused in her murder, charged with submitting presidential ballot in her name

Oklahoma going into a rather stormy pattern next few days. Stay weather aware!