Update: Additional photos have been provided by the FBI to help identify a suspect in a MidFirst Bank robbery in Shawnee. 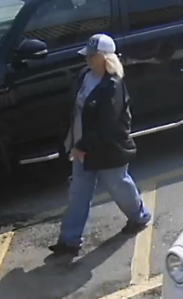 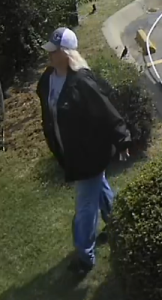 SHAWNEE, Okla. – The FBI is asking for help identifying a woman they say robbed MidFirst Bank in Shawnee, Friday afternoon. 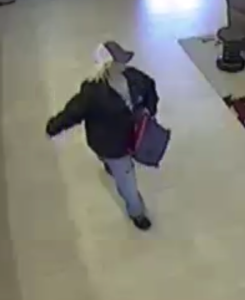 The suspect is described as being approximately 5’ 4” tall, 40 to 50 years old and as having blonde hair, blue eyes and a heavy build. She was last seen wearing a navy blue jacket and a navy blue hat.

Isaac Bruno owns the Mad Tatter tattoo parlor next door. He says their security camera caught the suspect walking towards the bank, then walking away just five minutes later.

“It was bizarre. I would have been running and freaking out the whole time,” Bruno told News 4. “She was just like, ‘I`m going on a stroll, here we go.’”

Officials say the suspect entered the bank, verbally demanded money from employees, and left with an undisclosed amount of money.

“We had no clue. The first officer on scene said he was about 15 seconds away, so she was in and out real quick,” Bruno said. “I guess they were even driving by when she was walking out.”

Bruno told News 4 that’s it’s not every day you catch an accused bank robbery on you security cameras. You also half expect her to be running out with bags of money and speeding off in a car, not calmly walking away.

“That would have been far cooler you see them doing that. I mean you couldn`t tell,” Bruno said. “There was no way to tell what she was doing or what happened. I mean we didn`t know.”

If anyone has any information on the bank robbery, please contact the FBI at (405) 290-7770. Tips can also be submitted online at tips.fbi.gov.