GUTHRIE, Okla. – The body of a 14-year-old boy was found after a Guthrie apartment caught fire.

Just before 11 p.m. Monday, Guthrie firefighters responded to a reported apartment fire near Pine and College, on the NE side of Guthrie.

When crews arrived, they found a two-story apartment building engulfed in flames.

They found a family on the SE corner of building, and helped a 40-year-old woman and 18-year-old female from the second story window. The family reported that there was still a 14 year old boy in the apartment. Fire crews made entry into the building in a rescue attempt but were forced back out of the building due to extreme fire and ceiling collapse. 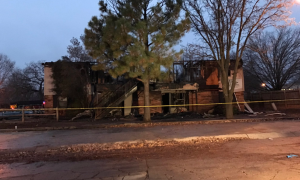 According to the Guthrie Fire Department, the body of 14-year-old Saul Bernal was found at approximately 1:30 a.m. Tuesday in the family’s second-floor apartment.

The women who evacuated the apartment were taken to the hospital to be treated for smoke inhalation.

A  firefighter was taken to the hospital to be treated for minor bumps and bruises after falling through the floor of a second-story apartment.

According to Guthrie school officials, Bernal was an 8th grade student at Guthrie Junior High School.

Administrators have arranged for counselors from around the district to be available for junior high school students Tuesday morning. Local counseling agencies were also contacted to provide additional support.

“Obviously, our heart goes out to Saul’s family as well the other families affected by this tragedy. The loss of young people is possibly one of the saddest parts of life and this is a very sad day in Guthrie. We will continue to offer assistance to our students and staff as they cope with this tragedy,” said Guthrie Superintendent, Dr. Mike Simpson.

The cause of the fire is still under investigation.

WASHINGTON (NewsNation Now) —  President Joe Biden plans to take executive action Friday to provide financial relief measures to millions of Americans while Congress begins to consider his much larger $1.9 trillion package to help those affected by the coronavirus pandemic.

Biden is scheduled to sign the orders and deliver remarks Friday afternoon. NewsNation will livestream the event in the player above.

BATON ROUGE, La. (BRPROUD) -- In the race to succeed late U.S. Rep.-elect Luke Letlow, another candidate has filed her campaign papers: his widow.

Julia Letlow submitted her qualifying documents for Louisiana's 5th congressional district race Thursday. Her bid for the seat comes less than a month after her husband, 41, died of COVID-19 complications on Dec. 29.

OKLAHOMA CITY (KFOR) - Oklahoma City police investigators are searching for a man who may have information about a robbery at a local restaurant.

On Thursday, the Oklahoma City Police Department released photos of a man they would like to speak with in regards to a recent robbery that occurred at a restaurant in the 3300 block of N.W. Expressway.