OKLAHOMA CITY – Firefighters were able to extinguish a blaze at a garage fire in northwest Oklahoma City Tuesday morning.

Officials say the fire started around 7 a.m. inside a detached garage at a home near N.W. 34th and Barnes. 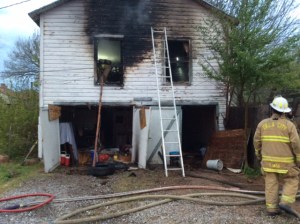 The second floor of the garage was destroyed in the fire.

Investigators believe someone was living in the garage on the second floor.

Firefighters believe whoever was living in the garage may have been bootlegging some natural gas from a nearby gas meter.

Fortunately, no one was injured in the fire.

So far, officials have not been able to locate the homeowner.

Firefighters noticed on the gas meter, there was an inner tube running from one side to another to get gas .@kfor

No injuries! Fire officials haven't been able to locate homeowners or talk to neighbors yet .@kfor