SEATTLE, Wash. – Amazon doesn’t just want to bring its virtual assistant, Alexa, to your home. Now, it’s aiming to have Alexa come with you everywhere, by putting it on your face, in your ears, and even on your finger. 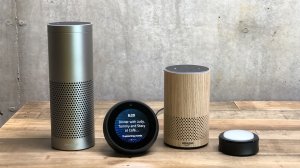 At a major media event on Wednesday, Amazon introduced a wide range of new products and services — all part of an ongoing effort to make Alexa an ever-more-important part of users’ lives. While the assistant started out in 2014 as the helper built into Amazon’s Echo smart speaker, the universe of Alexa-infused products produced by Amazon itself now includes a bevy of smart speakers, a smart oven, a clock, and three wearables.

These Alexa-summoning wearables — a pair of black glasses called Echo Frames, a dark gray ring called Echo Loop, and a pair of earbuds called Echo Buds— mark a move into a notoriously tricky market. For years, companies such as Fitbit, Jabra, Apple, and countless others have tried to convince consumers to wear tech all over their bodies, with limited success beyond watches (you’ve probably seen plenty of people sporting Apple’s AirPods, for instance, but lots of other companies hawking wearable technology, such as Google with its Google Glass, failed).

So how does Amazon plan to succeed? From what it showed off on stage and during product demonstrations on Wednesday, it will be by making wearables that can do a few complicated things in ways that feel simple and look unobtrusive. It’s making Echo Frames and Echo Loop available by invitation only through a program called Day 1 Editions, signaling that they’re earlier-stage products that only some people will be able to get their hands on -— for now, at least. All will be available later this year, the company said.

I got a chance to (briefly) try out each of these products, all three of which are dependent on a nearby smartphone running Amazon’s Alexa app. This much was clear: The decision to wear any of these gadgets will be deeply personal, and depend both on the fit and functionality.

Echo buds
The Echo Buds, which cost $130, will last for up to five hours and get an additional 15 hours of life from an included charging case.

The earbuds are a first for Amazon, but brands including Jabra and Bose already sell wireless earbuds and headphones, respectively, that can summon assistants, including Alexa. Still, Amazon is touting upcoming features such as the ability to find a particular item (say, crackers) within Amazon-owned Whole Foods grocery stores.

I tried them on and found them comfortable and pretty easy to use: I had no problem getting Alexa to start giving me walking directions to Lola, a nearby restaurant, via Google Maps, or playing music on command.

In the din of the demo room, I tapped twice to turn on an active noise-cancelling feature, which immediately (and thankfully) turned down the volume of the world around me.

Wireless earbuds can be a tricky fit, especially for those of us with small ears, or they’ll appear to fit well but feel uncomfortable over time. I was surprised to find that the Echo Buds fit comfortably in my ears on the first try, and didn’t feel as though they would wiggle out, either.

Echo Frames
Perhaps a much bigger wearable gamble than earbuds is a device that sits on your face. Nearly six years after Google introduced its ill-fated Google Glass smart glasses, Amazon is hoping for success with a similar product that’s a bit simpler — there’s no camera or display — and looks a lot more like, well, glasses.

The Echo Frames cost $180 (via invite only) and include battery life that should last for a day. Users will be able to have them fitted with prescription lenses.

As a daily glasses wearer, I take my eyewear very seriously; it’s not just an indispensable tool but also a fashion statement. The plain black design, with chunky temples meant to disguise a touch pad, a couple buttons, and other electronic components, isn’t going to win accolades from fashion lovers, and it definitely feels heavier than your average pair of dumb glasses.

It also won’t fit a lot of people: I was told that the pair I tried on, which was too wide for my narrow face, will be the only width available.

Assuming you like how it looks and how it fits, though, Echo Frames could be useful to those who really want discrete Alexa access.

It was simple enough to command the virtual assistant while wearing the glasses, and sound from the built-in speakers — which is meant to be heard only by the wearer — was better than I expected. Using Alexa in this manner was also a heck of a lot less distracting than pulling out a smartphone, which is, of course, part of the point.

Echo Loop
While many people are familiar with smart glasses and earbuds, the $130 Echo Loop (also available via invite only) represents a shift into a wearable category many consumers might not be familiar with: the smart ring.

At first glance, it looked a bit silly: a thick, metallic ring, with a barely visible button on one side for talking to Alexa, and tiny dots representing microphone and speaker holes on the other side.

Yet after a few minutes of playing with it, I was pleasantly surprised by how easy it was to talk to the ring and hold it up to my ear to hear Alexa’s responses to questions like, “What’s the weather in LA?” And unlike the glasses, it will come in four sizes.

A smart ring isn’t for everyone, but it may entice some Alexa fans who wouldn’t ordinarily want a wearable gadget — at the least, it’s less obtrusive than earbuds or a pair of smart glasses.

The briefing will take place around 7 p.m. Eastern and can be watched live right here.

CLEVELAND COUNTY, Okla. (KFOR) - You've likely heard about the unsolicited seeds people are receiving in the mail from China, but that's not the only odd packages some are getting.

A Cleveland County woman received a package of face masks from Shanghai that she never ordered.