MEEKER, Okla. – Charges have been filed against four people accused of allowing an Oklahoma teenager to starve on a property near Meeker.

Authorities say the investigation began after a passerby noticed something wasn’t right.

When he was found, the teenager only weighed about 80 pounds and was suffering from severe malnutrition.

On Monday, the State of Oklahoma charged Jimmy Jones, Amy Jones, Tyler Adkins and Johnathan Plank with a felony count of child neglect. 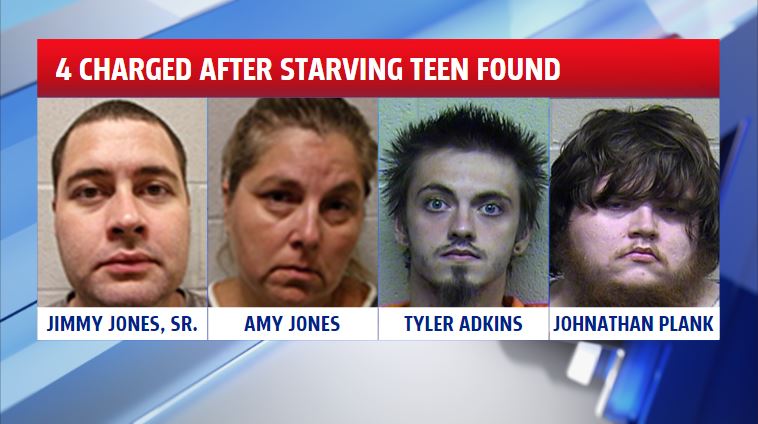 Court documents state that Adkins “wished that he or someone had taken [the victim] for medical care.”

Lincoln County First Assistant District Attorney Adam Panter said that he charged the family with the most serious charges he could based on the facts. Each of the charges carries a maximum sentence of life in prison.

Valentine’s Day is all about showing your spouse you appreciate them, but it can be challenging to come up with a good gift idea, despite the many options.

The best creative Valentine’s Day gifts are unique ways to show you care.

Valentine’s Day is the perfect opportunity to show your sweetheart how much you care, and with a little thought, you can find the perfect gift.

Another round of wintry mix possible for Oklahomans

Close call for semi serves as reminder on icy roads

Here’s what the Fed interest rate hike means for …

The Columbia disaster: How NASA honors the astronauts

Federal investigators on Wednesday found no documents with classified markings during a search of President Joe Biden’s Rehoboth Beach, Del., home, his attorney said in a statement.

Americans reliant on SNAP benefits will soon see a cut in their monthly payments as the extra money added during the pandemic will soon expire.

Expired tags may lead to problems for Oklahoma drivers