OKLAHOMA CITY (KFOR) – Freezing conditions and icy roads have caused accidents and road closures in the metro area and beyond.

An Oklahoma Highway Patrol official said as of 9 a.m. Saturday, troopers responded to 15 accidents overnight and into the early morning in Oklahoma County. She said some of those accidents resulted in injuries, but there were no major injuries. 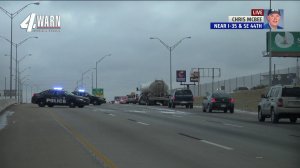 The official said the accidents were spread out across the area, but many of them occurred on roads with heavier traffic, such as Interstate 40.

News 4 Storm tracker Marc Dillard backed out of the mess as several trucks jackknifed in both west and eastbound lanes. The accidents briefly shutdown the highway.

Even wreckers had a hard time gaining traction on I-44 slick spots.

News 4 meteorologist Emily Sutton said the metro area lucked out compared to what Friday’s models for Saturday were showing.

A Winter Weather Advisory is in effect throughout Central Oklahoma until noon, and a Winter Storm Warning is in effect north of the Tulsa area area. 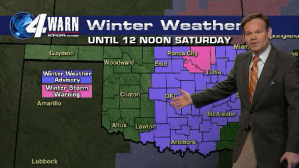 Freezing drizzle changed over to light snow and flurries in the Oklahoma City area, which is good news, News 4 Meteorologist Jon Slater said.

Dillard traveled Interstate 40 East and noted several accidents and cars that went off the road.

“One car was well off the road, I’m talking about 20 yards off the road from a spinout,” Dillard said. “The further east you go the more snow that has fallen. This is going to be snow-packed for quite some time.”

Slater said there's a snow presence further north and east, with heavier snow – about a half-inch to an inch of snow – in the Stillwater area.

Jared Avilez, a licensed drone pilot, provided the following photos of snowy Stillwater that he took with his drone:

OKLAHOMA CITY (KFOR) - Firefighters were called to an apartment building near Southwest 89th and May around 12:30 Saturday morning. "I heard some crackling, popping, and I looked out the window, and I see big flames coming out of this area," witness Cindy Carr said. "I was standing right here at the bottom of the stairs and the heat, you could feel the heat, like when you open the oven."…

CALIFORNIA (CNN) -- Actor and director Clint Eastwood, a longtime supporter of Republican candidates, appeared to back Democratic candidate Michael Bloomberg for president and criticized President Donald Trump's behavior in office in an interview published in The Wall Street Journal Friday.

"The best thing we could do is just get Mike Bloomberg in there," the Hollywood conservative said of the former New York mayor, according to the Journal.

LAS VEGAS (AP) — Bernie Sanders scored a resounding victory in Nevada’s presidential caucuses on Saturday, cementing his status as the Democrats' national front-runner amid escalating tensions over whether he’s too liberal to defeat President Donald Trump.

The 78-year-old Vermont senator successfully rallied his fiercely loyal base and tapped into support from Nevada’s large Latino community as the Democratic contest moved for the first time into a state with a significant minority population.