CHICKASHA, Okla. – A fresh design is helping point the the way at the Chickasha Municipal Airport.

The Oklahoma Chapter of The Ninenty-Nines, Inc., brought their time and talent to the airport, painting a 70-foot compass rose and refreshing the “CHICKASHA” lettering on the airport’s taxiway just north of the airport’s terminal . 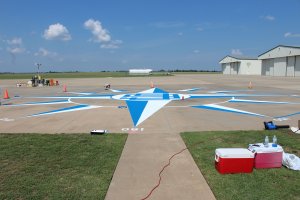 Compass rose markings aid in calibrating an airplane’s compass, which the Federal Aviation Administration requires. The Ninety-Nines have been involved in air marking since the early 1900s, volunteering their time to paint airport names, compass rose symbols and other identifications, according to a City of Chickasha news release.

“Traditionally air marking is done by Ninety-Nines to support aviation and encourage people to appreciate the history of women in aviation,” said Teresa Camp, special projects engineer for Executive Aircraft at Boeing and a member of the Oklahoma Chapter of Ninety-Nines. “Air marking is keeping alive a grand tradition while creating a work of art that a city can be proud of and one that will be useful for the general aviation community – it’s a win-win for so many stakeholders.”

The City of Chickasha’s previous air mark faded over the year. City officials were happy to receive a new compass rose.

“Teresa Camp and The Ninety-Nines are a very well-coordinated organization,” said Susan McDaniel, Chickasha city clerk. “Many people came from out of town to help with the painting, and I appreciate people taking time out of their lives to give to Chickasha.” 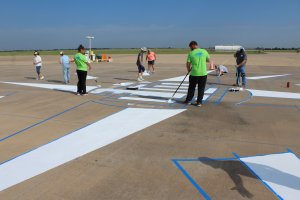 The Ninety-Nines are an international organization of licensed women pilots that includes private pilots, airline pilots and military pilots.

“Headquartered in Oklahoma City, their mission is to promote the advancement of aviation through education, scholarships and mutual support while honoring their unique history and sharing their passion for flight,” the news release states.