YUKON, Okla. (KFOR) – A couple of famous tough guys have the back of a 12-year-old Yukon boy who was violently beaten by other students, and a GoFundMe page has been set up to help the young man. 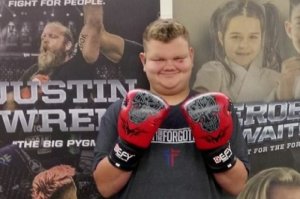 MMA legend Justin Wren and WWE legend Mick Foley are standing behind Rayden Overbay, for whom a GoFundMe page has been established.

Both Wren and Foley have expressed their support for Rayden, and #StandWithRayden became widespread on social media.

Wren posted a message on Twitter about the attacks on Rayden, saying “We are doing something about this. I’ve been spending a lot of time with Rayden and his family. If you want to send your love and support via message or video use the #StandWithRayden and #FightForTheForgotten. We will show Rayden and his family some of the best ones.”

Foley applauded Wren’s support of Rayden, and offered his own support and special message to Rayden via Twitter.

“I’m standing with you. If there’s anything I can do to help you and make your day a little better, I surely will,” Foley said in a special video-recorded message.

Thank you @ThBigPygmy for what you are doing to help Rayden and his family. Please show them this video to let them know that I #StandWithRayden https://t.co/lxgeK1qKGU pic.twitter.com/k19VZxZdKu

Rayden was the victim of two bullying incidents in which he was physically beaten by other students. Those incidents were caught on camera and went viral on the Internet.

Rayden suffered a concussion from the beatings and is receiving hyperbaric treatments.

Rayden’s parents describe him as a highly-functioning special needs child with many different challenges, including ADHD, ODD, ADD and being on the Autism Spectrum Disorder.

“Just because we don’t label him as a special needs child, doesn’t mean that he’s not,” Rayden’s father Danny Overbay said.

In the video he sent to Rayden, Foley spoke about autism in his own family.

“I am the father of a child on the autism spectrum, and so you are part of my extended family,” Foley said in the video.

Rayden was targeted by his fellow students, once outside, a second time in a school bathroom. In both incidents, Rayden is being repeatedly hit by students.

A GoFundMe page was set up to pay for Rayden’s medical bills and get him in suitable housing, according to a news release issued by Aja Shepherd with GoFundMe Regional Communications.

Rayden’s parents spoke out against bullying during a press conference in September.

Wren is doing his part to speak against bullying. He’s also spending plenty of time hanging out with Rayden, as you can see in the below video that Wren posted to Twitter: