COLUMBUS, Mississippi – A fast food worker who became upset with a drive-thru customer was arrested on a felony charge of “selling unwholesome bread or drink” after allegedly licking the cheese and placing menstrual blood on a cheeseburger before serving it at a Jack’s restaurant in early January.

18-year-old Sky Samuel turned herself in and has been released on a $5,000 bond.  If convicted, she could serve up to five years in prison for the alleged crime.

City of Columbus Public Information Officer Joe Dillon tells KFOR-TV, “The employee didn’t understand the woman’s order, words were exchanged, and it went downhill from there.” 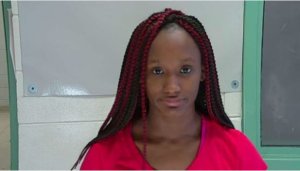 That Facebook post came from the mother of Samuel’s teenage co-worker, who went into detail about the allegations against Samuel.

Hollins also posted a recorded phone call between Samuel and her daughter, in which Samuel can be heard saying that security cameras “can’t see right there” in the area where Samuel was standing.

In the recording, Samuel denied any wrongdoing.

Hollins also claims that her daughter was forced to resign two days after reporting the incident, however Dillon says the employee and Samuel were fired for food theft.

The restaurant chain has handed over all surveillance video to Columbus police and is fully cooperating with authorities, as well as launching its own investigation.

The Mississippi Department of Health also conducted an investigation and found the restaurant is meeting all safety standards.

Dillon  says the allegations stem from an isolated incident and that Jack’s is an upstanding restaurant and valuable member of Columbus’ business community.

“Jack’s Family Restaurants has recently been notified by the Columbus Police Department that they have issued an arrest warrant for a former restaurant employee accused of alleged food tampering. Jack’s fully supports the police department’s efforts to determine if there was any wrongdoing in this case. The company has cooperated fully with this investigation and will continue to do so.

While these allegations are an isolated incident and appear to be the actions of a single person, we take them very seriously. Food safety is our number one priority and the company has a zero tolerance policy for any violation of our stringent food handling procedures. Upon learning of this alleged incident, the company immediately launched an internal investigation and simultaneously engaged the services of a third-party investigator to conduct its own independent investigation. As part of our internal investigation, we have reviewed several hours of restaurant surveillance footage and interviewed all employees working during the shift in question. Both of these investigations are still ongoing.

Jack’s has also been in contact with local authorities and the Health Department, which conducted a restaurant inspection on Wednesday, January 11th. The restaurant received an “A” rating during this inspection. For years, Jack’s has employed various hiring and training practices for all of our team members including pre-employement and random drug testing, as well as an employment screening program to make sure that they fit our culture of providing quality service to our guests. This alleged action by a single person, is not representative of our many dedicated and loyal team members who take pride in serving each and every guest with smiling faces and friendly service.

While we are eager to bring this investigation to a close, we are also committed to working hard to win back the trust of our guests in Columbus, MS,” a statement from Miguel Piedra, with Jack’s Family Restaurants, read.

Pedistrian collision on I-44 & Penn leaves one dead

Housewarming gift turns out to be a scam for many …

What to know about the pause on student debt relief

1 dead, up to 12 missing in landslide on Italian …

When will NORAD start tracking Santa this year?

This is the eighth time the restart date for payments has been rescheduled, but the Department of Education says they need more time to resolve their legal fight.

Republicans’ House majority in the next Congress climbed to 220 on Tuesday, when Republican Kevin Kiley defeated his Democratic opponent, Kermit Jones, in the tight race for California’s 3rd Congressional District. The Associated Press called the race for Kiley on Tuesday afternoon, two weeks after voters headed to the polls to cast their ballots in […]

House Democrats call on DOJ to respond to anti-trans …

House Minority Leader Kevin McCarthy (R-Calif.) said Sunday that he’ll spearhead a House select committee on China if he’s elected Speaker when the new Congress convenes next year.  “They never once in this majority had a hearing [on] where COVID originated from … They have never stood up to China,” McCarthy said of Democrats in […]

Pedistrian collision on I-44 & Penn leaves one dead

Hedge apples: What are they used for?

Traffic Alert: Traffic at I-40 at Ft. Smith Junction …

A miracle for one metro business owner after doctors …

Best deals on popular gifts that will arrive in time …

How to wrap a present

These discounted stocking stuffers are worth buying …

Best Black Friday deals that are half-priced or better

Black Friday gifts and essentials to buy for yourself

Start your Cyber Monday shopping now with these early …