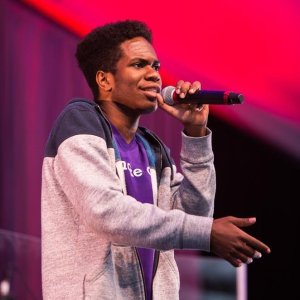 Obasi Shaw, 20, made history when he decided to submit a rap album as his final thesis at Harvard.

Shaw could have submitted a book of poetry, a novella or a short story, but he decided to take a different path. He’s been rapping for a few months, and the idea of writing a rap album for his thesis came from his mother.

“I had no other ideas, so I had only one shot. I put together an application, submitted it and expected nothing, but here we are,” Shaw said.

The album, entitled ‘Liminal Minds,’ explores topics like race, religion and black identity. Drawing from his experience, Shaw focuses on the racial climate in America and how black people have to cope with their lives in his album.

“I want to explore the complex nature of what it means to be black and to be human. My goal is to get people to empathize with these people and to realize that they are dealing with so many difficulties in life,” Shaw said. “Nobody is less human than anybody else.”

In one of the songs, ‘Open Your Eyes,’ Shaw focuses on the African-American struggle for rights:

“Just watch the thrones, our people are known

For making history of the impossible.

From rap to White House, we unstoppable.

He said he was influenced by his parents, both Harvard graduates. Shaw had their support and understanding from the very beginning of the project.

“I am very proud of him, and I hope he will continue with his accomplishments,” said Shaw’s mother, Michelle Shaw.

Shaw said he will graduate from Harvard with an A- for his work in the English Department and he’ll be going to work for Google as a software engineer after graduation.

“I’m still unsure what my future looks like in regards to music, but I’ll certainly continue at least as a hobby,” Shaw said.