STILLWATER, Okla. – A crash at the Oklahoma State homecoming parade on Saturday claimed four innocent lives, including the life of a 2-year-old boy.

Nash Lucas was attending the parade with his mother, Niki,  when authorities say 25-year-old Adacia Chambers’ car barreled through the crowd.

After he was rushed to a nearby hospital, Nash was pronounced dead from his injuries.

Now, family members and friends are left to cope with the loss of such an innocent life.

“He was such a good boy. He didn’t deserve that,”said Mercedes Kling, Nash’s teacher.

In a classroom of seven 2-year-old students, Kling says Nash simply stood out.

“Nash was always so full of life,” she said. “He was very easy to get attached to.”

Kling says he was a little light in the classroom, who always seemed to be up to something.

Kling says that Nash would constantly talk about Eskimo Joe’s and the restaurant’s mascot, Buffy.

The last memory she has of the little boy was him wearing shark shoes, which tried to attack all the other children by the end of the day.

“You don’t expect to send a kid home on Friday and then not see them show up on Monday,” she said. 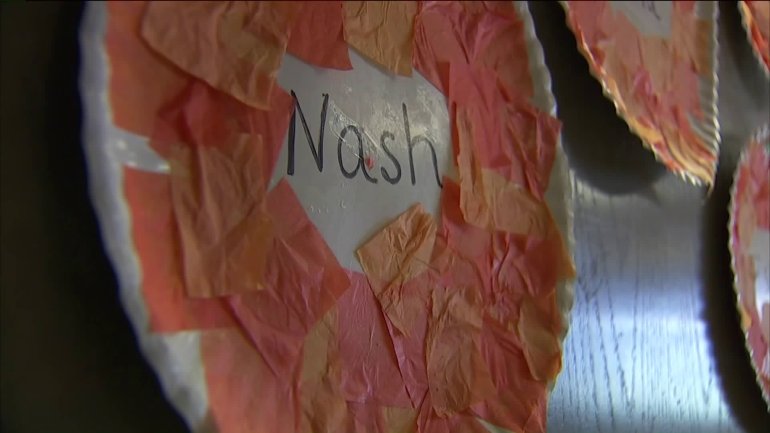 After hearing the news on Saturday, she says she tried to prepare for what it would be like at work this week.

“I spent all weekend crying, thinking that today would be a little bit easier but before I even walked in the classroom, I lost it again. It’s just hard to see his things in there and, you know, his favorite things, his favorite toys,” she said. “I thought I had prepared myself for it, but not as well as I could have.”

Nash’s artwork is still hanging in the classroom and Kling says they will save everything so his mother can get it when she is ready.

“You could tell how much he loved his mom,” Kling said. “You could just tell. She was very hesitant to leave him. She would always say, ‘I love you’ and he’d be ornery and looking at her.  And she’d be like, ‘Say it back.’ And we’d all wait a few minutes for him to say it back before she left. You could just tell that their bond is very close. I was a young mom, so I feel  for her.”

Kling says she knows the other six children in her classroom will begin to ask questions, but she isn’t sure exactly what she is going to tell them yet.

“We would like to express our deepest gratitude to the Oklahoma City Children’s Hospital, the Stillwater Medical Center, and Oklahoma State University for everything they did for our family,” the family said in a statement. “The outpouring of love from everyone has been appreciated more than words can express and we are truly in awe of how many people have reached out to us in our time of need.”

Family members say two men picked her up and drove her to the hospital.  In fact, one of the men even stayed with Niki and called her mother after they were separated at the parade.

The family says that they prefer not to talk about Chambers, but rather remember the red-headed, blue-eyed boy who was taken far too soon.

“Nash was a sweet, happy, smart little boy who had so much potential,” the family said. “He was a joy to be around and absolutely nothing can be done to make up for the loss we have suffered. We offer condolences to the other families who lost loved ones as well, and continue to pray for those fighting for their lives.”

Nash would have turned 3-years-old in April.

Funeral services for Nash will be held Wednesday, Oct. 28, 2015, 2 p.m. at First Baptist Church in Weatherford.

CHOCTAW, Okla. (KFOR) – The Oklahoma Corporation Commission is taking action after dozens of drivers’ engines failed shortly after they filled up their fuel tanks at a Pilot gas station in Choctaw.

“Hell, I just stopped here to get gas; we were almost empty,” Robert Harmon said. “I didn't get out of the parking lot; they have water in their gas.”

The mid-30-degree temperatures and flood waters Wednesday morning didn’t faze Burrell. Instead, he hopped into action, helping kids get to class with dry feet. Cell phone video sent to KFOR shows him standing barefoot in the cold water, helping kids out of their cars. This is only a glimpse of what he did for them.

“We are hungry and we are tired,” Tonya Robinson said. “We don’t have anywhere to go right now.”

‘We deserve to be heard’: Man on mission to make voting accessible to Americans with disabilities

Is Trump or Biden more of a patriot? Here’s what 1,100 voters said

OKLAHOMA VOTERS: Do’s and don’ts of voting in person

Anxiety 2020: Voters worry about safety at the polls