A trip to a tourist attraction in Scotland turned out to be a life-changing moment for one woman after a thermal camera detected she had breast cancer. 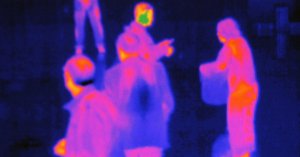 Bal Gill, 41, was looking back over images from her trip to Camera Obscura and World of Illusions, in Edinburgh, when she noticed a heat patch over her breast.

After making an appointment with her doctor, Gill was diagnosed with early stage breast cancer — but experts have warned that Gill was lucky and thermal imaging cameras are not effective in screening for the disease.

Gill, who visited the attraction in May, wrote to Camera Obscura following her diagnosis, telling staff she had searched Google for information about what the hot spot could mean and saw articles about breast cancer and thermal imaging cameras.

“I have now had two surgeries and have one to go to prevent it from spreading,” she wrote in a letter published on the Camera Obscura website.

“I just wanted to say thank you: without that camera, I would never have known. I know it’s not the intention of the camera but for me, it really was a life-changing visit.”

Andrew Johnson, general manager of Camera Obscura and World of Illusions, said it was “amazing” Gill noticed the difference in the image and acted promptly.

“We wish her all the best with her recovery and hope to meet her and her family in the future,” he said.

Gill may have had a lucky break thanks to a thermal imaging camera, but medical experts do not recommend using the devices for screening purposes.

“Mammograms use low energy X-rays to create images which are interpreted by the clinical team,” said Gillies in a statement.

“In the past thermal imagining cameras have been experimented with to detect cancer however this has never been a proven screening tool.”

Caroline Rubin, vice president for clinical radiology at The Royal College of Radiologists, said there is no scientific evidence to suggest they are effective tools in screening for breast cancer or other medical conditions.

“The principle behind using thermography is that infrared heat cameras can be used to map patterns of heat and blood flow close to the surface of the body,” said Rubin in a statement, who explained that cancer tumors generate heat as they tend to have a good blood supply but they vary hugely in size and position.

“Thermography devices are not sensitive or specific enough to be a trusted method to detect breast cancer — in Ms Gill’s case the discovery was serendipitous.”

Rubin said all women should make sure to attend routine mammography screening appointments.

The US Food and Drug Administration (FDA) also warns against using thermal cameras as a standalone diagnostic tool.

“Thermography is not a substitute for regular mammograms and should not be used in place of mammography for breast cancer screening or diagnosis,” said the FDA in guidance issued February 2019.

October is Breast Cancer Awareness Month — an international campaign aimed at increasing awareness of the second most common cancer in women.

Some women are diagnosed with breast cancer after noticing symptoms, but many women with the disease have no symptoms at all.

Experts recommend getting mammograms from around the age of 40 to 50 onwards.