MOORE, Okla. - Olivia Reese says being arrested was an answer to her prayers.

At the time, she says she was high on methamphetamine.

"I had been up for a week," remembers Reese, who was initially stopped for a broken tail light. "I'd hit my rock bottom. I was addicted to meth for six years."

A Moore police officer eventually took Reese into custody, arresting her for driving under the influence.

She says she had prayed for a miracle the week before and now believes her arrest was the answer to that prayer.

She sat in the Cleveland County Jail about four months before choosing drug court.

Reese spent the next year and a half working off her felonies through the drug court program.

"I could have got probation, but I knew I'd just end up back out there (using drugs)," Reese said.

This week, she was back at the Cleveland County Courthouse for her graduation ceremony.

Reese's family knew it was going to be a special day, but they didn't know how special until she faced the judge to read her petition to have her felonies dropped.

Reese had noticed a uniformed police officer sitting in court, but she didn't recognize him.

When the judge asked her if she knew the officer, she said she didn't.

However, the judge explained to her that she actually did know him.

Sgt. Derek Dean was the man who arrested her 26 months ago.

Dean started his shift three hours early that day to be part of Reese's special day. 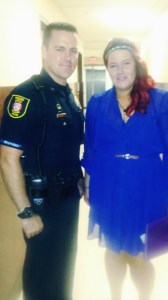 urprised that I showed up just for her," said Sgt. Dean. "We just do the job because we're committed to helping the community. It was awesome to see a positive thing come from what we do every day. You just don't ever get to see it."

They snapped a photo, which Reese posted to Facebook to remember the day.

Reese has been sober since her arrest and is now raising her son, Maverick.

She believes they owe their life together to Sgt. Dean.

"My son might not have been here if he wouldn't have pulled me over. He's a hero," Reese said.

Indeed, both the officer and the offender were impacted that day.

"It was an awesome experience for everybody," said Dean.

CRAIG COUNTY, Okla. (KFOR) – A district attorney has found that an Oklahoma Highway Patrol trooper was justified when he shot and killed a vehicle passenger on the Will Rogers Turnpike.