OKLAHOMA CITY (KFOR) – A homeless man says he was trying to get a new job and turn his life around – when he was robbed at a convenience store – by an employee.

It’s certainly not something you hear of every day – a clerk robbing a customer, but police say he did so by telling Herbert Stapp his money was fake and pocketing the bill.

“I couldn’t imagine that the guy of this stature that gave me the $100 bill would have done something like that to me, so I was like ‘this is all wrong,'” said the victim, Herbert Stapp.

Stapp says a felony and time behind bars contributed to his homelessness.

But the $100 bill he had was a gift from a man who was trying to help Herbert turn things around so he could get an ID, birth certificate – and employment.

“At the end of the 90-day period when they offer me a full-time position, I’m gonna have my dancing shoes on because they had faith in me,” Stapp said.

So, when Stapp went to buy sodas at the Shell near Reno and Classen and the clerk claimed the 100 dollar bill was fake – he didn’t believe it – and called 911.

When police got there, the clerk had already left for the day.

“He went home with the $100 bill,” said MSgt. Gary Knight with the Oklahoma City Police Dept. “Officers were able to call him and get him back to the scene.”

“It was an act of God is the only thing I can say,” said Herbert.

“As it turns out, it wasn’t a counterfeit bill,” Knight said.

“The female officer made the comment ‘Sir if you counterfeited this, you did a very good job,'” said Herbert. 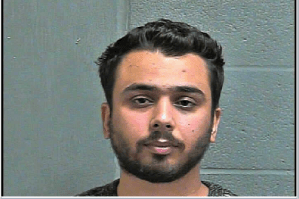 The clerk – 29-year-old Hamzeh Al Arabiyat, was arrested on a robbery charge.

As for Stapp, he got his money back and is already hard at work on getting his birth certificate and ID so he can get his life back on track.

He says he’s beyond thankful.

“It’s because of what sits right here,” Herbert said. “It’s the Good Lord Jesus Christ. He’s my A number one wingman and I wouldn’t do anything without Him.”

The clerk was booked into the Oklahoma County Jail.

We’ve tried reaching out to the store owner for comment and to see if that clerk is still employed but have not heard back.

GUTHRIE, Okla. (KFOR) – “Guthrie has a lot of people with big hearts, but OJ probably has one of the biggest,” Donna Hart said.

When you walk through the doors of the Hope House, it can be humbling whether you are a visitor or life’s unfortunate circumstances have led you here. Donna retired from the Department of Human Services, but her heart for serving did not. She stumbled upon the Hope House and its need for volunteers, and that is how she met OJ Myers, the administrator of the Hope House. She nominated OJ for Pay It 4Ward.

OKLAHOMA CITY (KFOR) – A man charged with first-degree murder and running an illegal marijuana grow operation is out on bail Tuesday after a year behind bars, but he and his loved ones are saying the fight is not over.

LaRue Bratcher, a black man, is accused of murdering a white man who he believed was breaking into his business, Premium Smoke LLC. He was held at the Oklahoma County Detention Center until Tuesday, after Black Lives Matter-Oklahoma City posted his bond for $400,000.

OKLAHOMA CITY (KFOR) – A group of three dozen lawmakers, including 28 republicans, are asking Gov. Kevin Stitt and the state pardon and parole board to reopen the investigation that led to Oklahoma death-row inmate Richard Glossip’s conviction.

The group said new evidence found by Glossip’s attorney should prompt an independent investigation into the 1997 beating death of motel owner Barry Van Treese at the Best Budget Inn in Oklahoma City.

KFOR honors Nexstar’s 25th anniversary with day of giving back

JetBlue ‘revisiting’ its policy in response to video of passenger, flight attendant arguing over eye mask