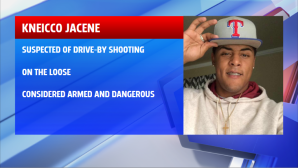 HOLDENVILLE, Okla. (KFOR) – Holdenville police are searching for a man believed to be involved in a drive-by shooting.

Kneicco Jacene is suspected of participating in a drive-by shooting in the 600 block of South Oak at around 5 p.m. Thursday, according to a Holdenville Police Department news release posted on Facebook.

“Officers responded, and Chief [Chris] Perteet made contact with the victims, who stated the shots were fired at them from a moving vehicle,” the news release said. “Thankfully, no one was injured during the shooting.”

The suspects were identified and their descriptions were sent to surrounding law enforcement agencies.

Wewoka police stopped a vehicle that matched the description of the vehicle involved in the shooting. One of the occupants of the vehicle – Jacene – fled on foot.

Another suspect was arrested and driven back to Hughes County.

Perteet has asked the U.S. Marshal Service and the District 22 Violent Crimes Task Force   to assist in the investigation and help apprehend Jacene.

“If you know the current whereabouts  of Jacene, please contact your closest law enforcement agency,” the news release states. “He is to be considered armed and dangerous.”